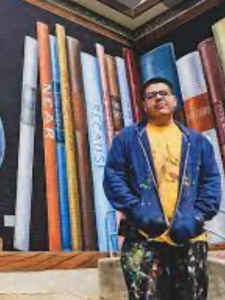 Armando Castelan considers himself lucky to be able to live in Houston, known as the most diverse city in the United States.

One of the epicenters of cultural diversity is the Alief community, where on any given day one can hear countless languages spoken, from Spanish to English to Vietnamese, Urdu, Arabic, Tagalog, Chinese – and the list goes on.

The community’s multicultural makeup is aptly illustrated by 22 distinctive globes that greet motorists along the busy Bellaire, Beechnut and Bissonnet street corridors. The mini-murals remain a source of pride for residents since they were installed over a decade ago, and now are more relevant than ever — thanks to Houston’s evolving population of immigrants and refugees, the showcasing of the world’s athletes by the recent Olympics in Tokyo, and many other influences.

Just ask Houston muralist Armando Castelan, who created the unique art pieces at the request of the International Management District.

“I consider myself lucky to be living and working in an ethnically diverse city like Houston,” said Castelan, 42, a native of Puebla, Mexico, who grew up in Los Angeles. “I’ve enjoyed getting to know some of the people from the area and hear their feedback. “They like that their countries are represented in this way and that there is art in their community.”

It took Castelan several months to transform the 2-ton concrete spheres located along the medians into works of art. The management district board turned to Alief ISD to help decide which countries should be represented.

The school district provided the board with statistics on the countries where their students and families originated. The district then randomly assigned countries to the globes by drawing their locations from a hat. Continents as well as countries are represented, with colorful scenes depicting Asia, Africa, the Americans, Caribbean, the Middle East, and of course, Texas – and Alief.

The public art “has brought a whole new meaning to our area, by really highlighting the diversity that the International District has to offer,” said Natali Hurtado, management district executive director. “We’re truly a melting pot of beautiful and diverse cultures. We’re showing others what it means to embrace others regardless of where they’re from because we as Houstonians see and value the differences that ultimately complement our city.”

Since moving to Houston in 1992, Castelan has made his mark on the city’s art scene. He’s painted hundreds of murals in Houston and surrounding areas in collaboration with Houston Arts Alliance, the Weingarten Art Group, Lawndale Art Center, and others.

In addition to murals, Castelan creates illustrations for books and commercial materials.

“I also paint on canvas using acrylics and oils,” he said. “I love to do digital illustration and have illustrated some children’s books. My personal work is more in the surrealism style. I enjoy working with themes around love, nature, and geometry.”

When he’s not working on creating art, Castelan teaches a muralist workshop at Art League of Houston for teens during the summer and serves on the advisory board of the nonprofit Artists for Artists, which supports the Houston creative community.

See all 22 globes at https://imdhouston.org/mini-murals/