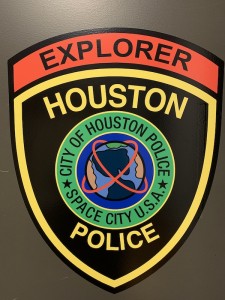 Active shooters. Domestic disturbances. Robberies in progress. DWI’s. Are the new Explorer trainees up for the challenge of dealing professionally with these (admittedly staged) scenarios? I spoke of this unique program with representatives of the Harris County Sheriff’s Office, the Houston Police Department, and Brian Burks of the International Management District. We discussed how the Explorer Program equips interested participants ages 14-21 with the real-life tools needed to handle these situations such as these as a police officer.

The Explorers Program is a nationwide initiative which began in the 80’s, and was established in the Houston Police Department in 2014. Participants at any of the twelve Explorer posts in the Houston area who may have an interest in a career in law enforcement or simply want to engage in the program can participate. The HCSO and HPD also collaborate for the benefit of the students involved. “Our organizations have a common goal and common purpose to work together, as well as learn from each other,” says Officer Michael Prause of HPD.

The International District is proud to finance the Explorer’s Program, and maintain a strong relationship with the Houston Police Department. “The district board feels that supporting this program is a direct investment we can make in the community,” says Burks. “We really appreciate all of the hours and the commitment the officers put into this program for the sake of the kids,” he continues. 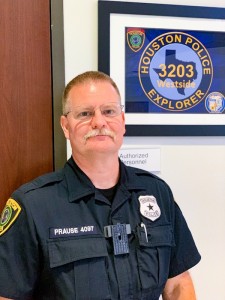 “We are grateful to the International Management District, because without them and their financial support, we wouldn’t be able to do most of what we do,” says Prause. “We, as the Westside Explorers, would not otherwise be able to afford the opportunity to compete across Texas, or have the necessary uniforms and equipment. We appreciate how they’re contributing to this program.”

Explorer participants in the International District area gather at the Westside Command Station (3203 South Dairy Ashford) on Tuesdays from 4-7PM, with optional physical training from 7-8PM. During these sessions, punctuality and commitment to being present are baseline requirements, mirroring the expectations of a real career. Each class begins with the Pledge of Allegiance, and rules of conduct are upheld throughout, including students being expected to stand when speaking to the group. Students learn theory, procedures, and are presented with ethical questions, followed by discussion in a classroom setting. Officers such as Prause, with a long history in law enforcement, are able to share real-life experiences, and perspectives to students just beginning a long journey.

After classroom learning, Explorers then translate their knowledge into practice by role-playing situations such as bomb searches, crime scene investigations, traffic stops, burglaries and much more. “We don’t water down the trainings at all,” says Sergeant Terry Garza of the HCSO. “We let the students experience exactly what it’s like to be a police officer.”

“One of our most intense classes is the ‘active shooter’ scenario. Students must work effectively to neutralize the threat. These are very fast paced scenarios; it really gets their adrenaline pumping,” explains David Hernandez of the HCSO. “Hostage negotiation is usually their most difficult task. Students have to keep a constant line of communication with their suspect, and it’s easy to run out of things to say. We practice that one a lot,” adds Garza.

Working effectively under pressure, while staying disciplined and calm is a skill that will serve students well no matter the career they pursue. “They will have a huge head start if they do decide to go into law enforcement,” says Garza. Explorers are taught leadership and communication skills and expected to demonstrate them throughout the program. “Many of our Explorers who have ended up joining our department have greatly excelled, and even have gone into special units very quickly. This is one of the best internships,” Garza points out.

Brought to Houston by former Sheriff Adrian Garcia, the Explorer program was intended to be an excellent recruitment method for the Harris County Sheriff’s Office. The program has since then exceeded expectations. “Officers who have gone through this training say it helped them a great deal, especially in the Academy.” Garza says. Many Explorer graduates also decide to join the military, attend college, or pursue other careers. 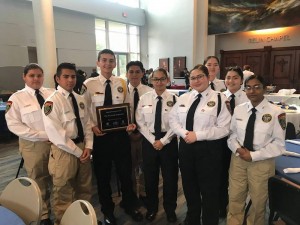 “They’re all really good kids and they end up making really good police officers, or excelling in other careers,” says Burks. “Even if a kid doesn’t end up going into law enforcement, they still go into the world as an ambassador and advocate for law enforcement, because they’ve seen what it’s like,” he adds.

Explorers reap the rewards of the program by pushing themselves to the limit mentally and physically through exercise and instruction. Garza and Hernandez see new recruits quickly realize that working in law enforcement is no easy job. They learn that college-level coursework is required, in addition to the daily stress and necessity to think on your feet at all times.

Explorers are given various opportunities throughout the year to show off the skills that they are mastering through competitions at the city and national level. One of these avenues is through the annual National Law Enforcement Exploring Conference, in which trainees compete in approximately 30 categories from misdemeanor traffic stops to bomb threats. “They have to dispatch it, if necessary, call for backup, helicopters, canines, or an ambulance, take care of the situation safely and legally, and decide who’s going to jail,” says Garza. Two years ago, the International District team finished third in the state of Texas out of 74 teams in the State Explorers competition in Arlington.

On a local level, explorers also get the opportunity to participate in a 40-hour course at the Harris County Sheriff’s Office Training Academy, with Q&A sessions with investigators and special units, history and training courses, access to the cadet’s obstacle course, and even rock climbing and zip lining. In addition, the Greater Houston Area Explorer Training Seminar brings together Explorers from around the city for a week of training, team-building, and competition. “Teaching the kids to work with other agencies will build a comradery amongst the agencies. These friendships and improved communication will benefit everyone in the future,” says Hernandez. 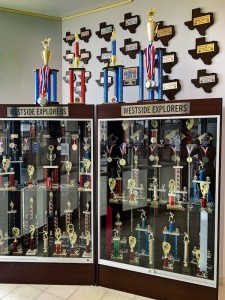 Not only do Explorers participate in training and instructional sessions, but they dedicate time for giving back to the community as well. The Westside Explorers recently volunteered to help renovate the home of an 87-year old woman suffering from dementia. The students fixed up the exterior, painted the front porch, installed a ceiling fan and light fixture, mowed and improved her yard. You’ll also find the Westside Explorers serving within ceremonies as HPD’s only Explorer Honor Guard, volunteering at the September 11th Heroes Run, the annual Alief parade, and more.

“The greatest benefits of this program are structure, discipline, and opportunity. What I enjoy most is helping kids who haven’t had an opportunity to succeed yet. This is a great way to improve your life,” says Officer Michael Prause of HPD. “Community service is community service, whether you’re putting somebody in handcuffs, or fixing someone’s yard,” he states.

Being accepted into the Explorer’s program means becoming part of a team, and a family. “Throughout the program, we check on their grades and make sure they’re doing well,” says Prause. Trust, and friendships, along with the lessons and experiences shared in the program, last for many years after trainings are over. “One day I got a phone call from one of our graduates who was in boot camp. It was the one call that he was allowed to make,” smiles Prause. Garza was also recently approached by a former Explorer, who told her, “The most fun I’ve ever had in my life was being an Explorer.”