By now, nearly all of you are aware that we’re responding in Louisiana to what is likely the worst natural disaster we’ve seen since Superstorm Sandy in 2012.

Historic flooding continues to submerge vast swaths of southern Louisiana trapping thousands in their homes, requiring water rescues of over 20,000 people, and forcing thousands of others to evacuate: we have over 10,600 people in at least 50 shelters tonight as I write this. About 1,700 National Guard troops were mobilized, with more on the way, more than 200 roads are closed, and at least 4 people have died as a result of these floods. This evening, the President declared a major disaster in Louisiana, specifically in the parishes of Tangipahoa, St. Helena, East Baton Rouge and Livingston—we expect more to be added to the list. Our response: DR 063-17 is now a Level 7 National Operation, which means we’re anticipating incremental costs to exceed $10 million.

How did this happen?

Basically, the inland equivalent of a slow-moving tropical cyclone parked itself over southeast Louisiana and dumped 24+ inches of rain in about 72 hours. It looked like this on Friday: 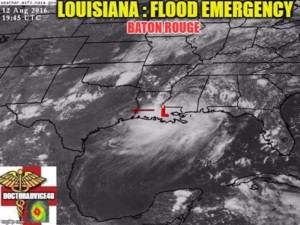 That means there was so much moisture in the atmosphere that parts of Louisiana saw more rain in 3 days than some U.S. cities have seen in the last few years combined. Here you can see the 3-day precipitation levels from Sunday morning: 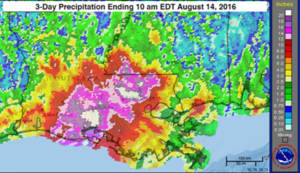 When that much moisture is available in the atmosphere, you get excessive rainfall of several inches per hour, and when the weather system just sits there like this one did (we call that a “stalled frontal boundary”), you literally get deluged. That much rain first caused dangerous flash flooding. Then, all that rain caused the rivers in Southeast Louisiana suddenly to rise well above major flood stage—at least eight river gauges set new records, exceeding the previous records by several feet and breaking records nearly a century old in some cases. Unfortunately, Louisiana and southeast Texas remain at risk for heavy rain and flooding for the next few days as the tropical moisture expands northward from the Gulf Coast and interacts with that stalled frontal boundary. We’re also expecting locally heavy rain in Mississippi and parts of Arkansas to southeast Missouri, southern Illinois, Indiana, and Ohio —fortunately, we’re not expecting rainfall amounts to be nearly as heavy as what we’ve seen the last few days.

This is the second time in 5 months that Louisiana has seen more than 24 inches of rain from a single event. In DR XXXX, almost 27 inches of rain fell near Monroe, Louisiana, on March 8-11, 2016, causing record flooding.

Parts of Mississippi also felt the impact of heavy rains and flooding with more than 50 people in a shelter in Natchez until at least Monday.

What are we doing about it?

Our operational centers of gravity tonight are Livingston Parish and East Baton Rouge Parish, and our main lines of operation are sheltering and feeding about 10,000 people for at least the next week. We’re deploying the military equivalent of a brigade to Louisiana. Our efforts in the field are led by our Red Cross Coordinating Officer, Becky McCorry, and Director of Disaster Relief Operations, Dave Gutierrez. As of tonight, we have:

Additionally, many of our best leaders from across the country are deploying to Louisiana:

We’re also standing up a major call center to answer the hundreds of calls pouring into the Louisiana Region—our DDEs are working with the Regions to recruit volunteers for this vital, virtual assignment.

It’s difficult to get your arms around numbers like 10,000 people in shelters—and we really don’t know the extent of the damage, yet, but we’re anticipating more than 10,000 homes destroyed or with major damage impacting at least 40,000 people. As I said, it’s too early to tell, but those are our minimum planning assumptions tonight. I encourage you to check out this website so that you can get a better sense of what we’re really dealing with.

While it may be too early to fully assess the damage, it’s not too early to realize the considerable scope and magnitude of this historic disaster—we expect to be conducting active relief operations in Louisiana for at least 6-8 weeks. Further complicating operations is the fact that we’re approaching the peak period of major hurricane season, so we’ve got to remain ready for hurricanes and other events (for example, we have a substantial wildfire with evacuations in the thousands in Lake County, California tonight). That’s why we’ve volunteer Job Director Marita Wenner to form a National Hurricane Leadership Team, and asked Crossroads Division Disaster Executive Keith Alvey and Mid-Atlantic Division Disaster Executive Scott Graham to remain in a ready reserve posture. As bad as Louisiana is, we just don’t know what else Mother Nature has in store for us over the next few weeks.

Harvey Johnson has established the DCS Mission Direction as: “Enable the Workforce to Deliver Our Mission with Compassion and Quality to More of Those in Need.” Louisiana will provide all of us ample opportunity to do just that.

Thanks to everyone who worked tirelessly this weekend and to those who are traveling late tonight and early on Monday to help the people of Louisiana. And a very special thanks to Sharon Panuska, NSS-FROST (Field Remote Operations Support Team) lead for DR 063-17: it was the determined work of Sharon and her team that helped us understand and react in a timely way to these devastating floods.