A really severe situation is unfolding. In what may be one of the most significant disasters since Hurricane Sandy, the American Red Cross has issued a Level 7 Disaster Response Alert for the devastated areas of Louisiana and Mississippi after days of heavy rainfall. A Level 7 disaster means that the American Red Cross anticipates it will cost more than $10M to fully respond to this ongoing disaster. Saturday night more than 4,700 individuals stayed in Red Cross shelters in the affected region. We are mobilizing a massive response effort.

Here is the latest update as of Sunday afternoon, August 14th. 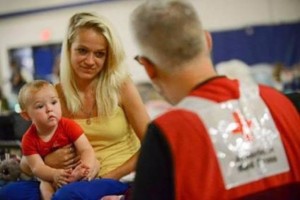 The American Red Cross is helping at least 4,700 people in dozens of emergency shelters in Louisiana after unprecedented flooding has left 15 rivers in record flood stage.

“This is an extremely chaotic situation right now, with life-threatening flood waters, power outages and road closures complicating relief efforts – as many local volunteers have also been directly affected by the flooding,” said Brad Kieserman, vice president, Disaster Services Operations and Logistics for the Red Cross. “This is by far our largest sheltering effort in Louisiana since Hurricane Isaac, and the bulk of this staggering devastation is in areas that typically don’t experience flooding. The Red Cross is mobilizing a massive relief effort which could be our largest since Hurricane Sandy.”

Thousands of people have been forced from their homes with little but the clothes on their backs. Red Cross disaster volunteers are opening shelters, providing meals and comfort. Additional volunteers, relief supplies and emergency response vehicles are moving toward Louisiana now to bolster response efforts. Officials estimate at least 2,700 homes have been affected – and this number is expected to grow. Many of the affected neighborhoods are areas that typically don’t experience flooding.

“Our work is just beginning, and we will be on the ground for weeks helping people in Louisiana pick up the pieces,” continued Kieserman. “Entire families have lost their homes and everything they own, please join the Red Cross in supporting Louisiana by making a much needed financial donation today.”

Flooding is expected to continue for several days, and once waters recede it will take some time to fully uncover the extent of the devastation. The Red Cross will be working closely partners in the days ahead to ensure people receive the help they need as quickly as possible.

Floods are among the most frequent and costly natural disasters. Conditions that cause floods include heavy or steady rain for several hours or days that saturates the ground. Flash floods occur suddenly due to rapidly rising water along a stream or low-lying area. Below and available on RedCross.org/prepare are a few steps people should follow to remain safe during a flood:

The Red Cross encourages everyone, especially those in at-risk areas, to re-visit their family’s emergency plan and review preparedness information for various disasters at RedCross.org/prepare. People in the path of wildfires or floods are also encouraged to download the free Red Cross Emergency App to have safety information, severe weather alerts and shelter locations available on their mobile device. Red Cross apps are available in smartphone app stores by searching for the American Red Cross or going to RedCross.org/apps.