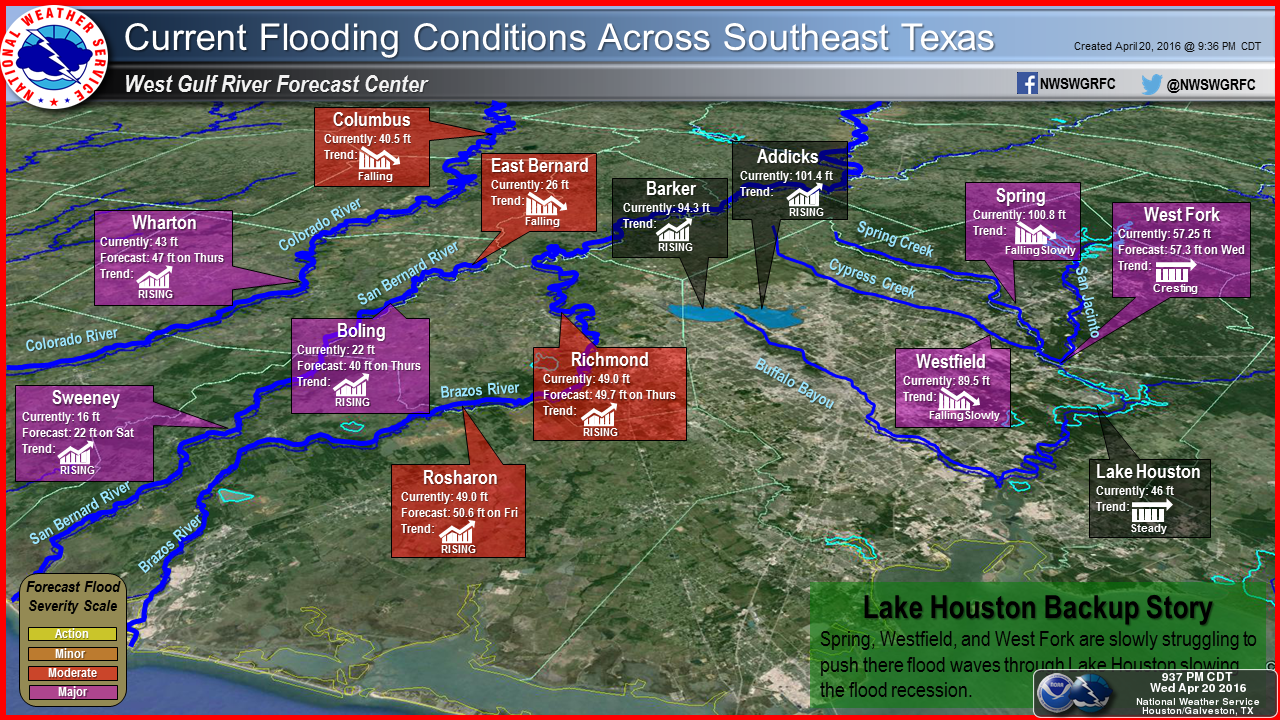 While some parts of Houston are starting to recuperate from the paralyzing flooding, residents are still on edge as a new line of rain and storms moves into the area. The Cypress Creek in northwest Houston keeps rising and still hasn’t crested, and additional rains will exacerbate the situation.

At least seven people have died in weather-related incidents, many of which occurred due to complications in emergency vehicle evacuations. In addition, more than 1,200 high-water rescues were made from Sunday into Monday. At the height of the flooding, roughly 123,000 homes had no power. Schools in Houston announced they would be open Wednesday despite the ongoing severe flooding that continues to cripple parts of the city.

The American Red Cross urges everyone in impacted areas to stay safe and access flooding information on RedCross.org.

The Red Cross is coordinating another massive relief operation to help residents throughout the greater Houston area – we are operating shelters, serving meals, distributing relief supplies and comfort items to individuals and families in need. On Tuesday night, more than 260 Texas residents found a safe place to stay in 12 Red Cross and community shelters.

“This is a very dangerous situation. People were forced out of their homes with nothing but the clothes on their backs and we opened 13 shelters

[on Monday] to help them,” said Brad Kieserman, vice president, Disaster Services Operations and Logistics for the Red Cross. “We are deploying a substantial amount of workers and relief supplies to the Houston area and we’ll be there for some time helping people recover.”

Mental health workers are helping people cope with this very difficult situation, and providing psychological first aid, especially for the survivors of repetitive loss over the last year. Out of our shelters, Red Cross health workers are also able to provide services, such as replacing prescription medications and eyeglasses.

Large disasters like this current flooding event create more needs than any one organization can meet. Consequently, the Red Cross works closely with the entire response community – federal, state, county and local agencies, other non-profit organizations, churches, area businesses and others – to coordinate relief efforts and deliver help quickly and efficiently. Partnering with the Southern Baptist Convention, the Red Cross will be serving hot meals in addition to providing relief supplies, such as mosquito repellent, bleach and shovels, as families begin cleaning up their homes.

As additional needs become apparent, we will continue to adjust service delivery resources to help those in need.

Every eight minutes, the American Red Cross responds to a disaster in which a family has lost everything – the roof over their heads, their clothes, and their most cherished possessions. And each time the Red Cross helps one of these families, it’s the start of a new story in which fear turns into hope. That story is made possible by compassionate people like you.

The American Red Cross is asking everyone to #help1family who has lost everything to a disaster by participating in the 2016 Red Cross Giving Day on April 21. Giving Day is a one-day fundraising campaign supporting the Red Cross mission to help people in need of emergency support. Visit the Giving Day website, enter your information, and your gift will be on its way to helping people in need. Make an impact. Your gift can provide urgent relief such as food, shelter and other essentials to people who need it most.