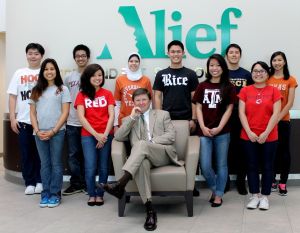 Alief ISD Superintendent HD Chambers has been selected as the Region 4 Superintendent of the Year. Region 4 serves a seven-county area composed of 50 school districts and 50 charter schools, representing more than 1.1 million students, 84,000 educators, and 1,600 campuses.

Chambers has served as Alief ISD’s superintendent since 2011. All 6,200 district employees were infused with his guiding principle of true collaboration being the key element to establishing and maintaining a healthy school climate. Chambers earnestly believes in the power and potential of public education, and he strives to contribute to the continuous improvement of the education provided in Alief ISD.

“Mr. Chambers is a passionate advocate of public education and a visionary school leader,” said Dr. Pam Wells, executive director of Region 4. “He is well respected by his colleagues in Region 4 and by educators and policy makers across the state. Mr. Chambers will be a tremendous representative of the superintendents and educators in our region.

“We congratulate HD Chambers for this well-deserved award and wish him well as he joins the prestigious group of leaders who are nominated for state Superintendent of the Year,” she said.

It is because of this belief that he remains active in so many community and statewide associations. Mr. Chambers is past president of the Texas Association of Suburban/Mid-Urban Schools (TAS/MUS) and serves on several boards, including the International Management District, Texas School Alliance and the West Houston Medical Center.

“This is a great honor for HD Chambers and all of Alief ISD,” said Board President Rick Moreno. “He and the dedicated district staff have taken the district to new levels of achievement under his guidance. The fact that Alief ISD is receiving this recognition at the local and state level is great news for all staff members, our students and the community.”

Chambers was also instrumental in the development and passage of House Bill 5 which provides graduation plan flexibility and a reduction in state-mandated testing for all public education students in Texas.

“HD was, and continues to be, the voice of reason regarding HB 5,” said Dr. David Anthony, CEO of Raise Your Hand Texas. “House Bill 5 will be remembered as landmark legislation and maybe the most important bill for students since 1985 when House Bill 72 passed. Everyone who was in the Capitol during the 83rd Legislative Session will never remember HB 5 without HD Chambers coming to mind.”

Chambers now advances as the Region 4 nominee for the 2014 Texas Superintendent of the Year Award presented by the Texas Association of School Boards. The winner of the state award will be announced September 26 at the 2014 TASA/TASB Convention in Dallas.