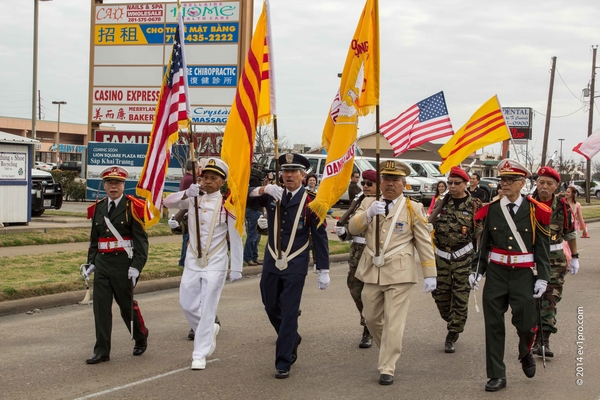 The Asian-American community in the International District celebrated the advent of the Lunar New Year with a colorful parade and two festivals that incorporated multiple cultures.

Lion and dragon dances and marching veterans groups were the star attractions at the Tet Lunar New Year Parade on Saturday, Feb. 1, as the parade ran along Bellaire Blvd. between Turtlewood and Cook Road, ending at the Hastings 9th Grade Center.

“Lunar New Year is incredibly important to the Houston Asian-American community. It is a special time for us to reunite with family, renew special friendships, remember the past, and prepare for the future. The 2014 Tet Lunar New Year Parade gives us the opportunity to celebrate as a city and share our culture and good wishes with all the residents of Houston.”

“Houston has one of the largest Vietnamese populations in the country,” said Karen Loper, a director on the International Management District board who also works in Vo’s office. For that reason, Vietnamese veterans’ groups welcomed American veterans to participate in the parade. “What we really want is for this to be not just a celebration for the Vietnamese community, but for all of Alief,” Loper added.

The following weekend, two Lunar New Year festivals offered a variety of attractions for the community. Lunar New Year Houston celebrated the Year of the Horse with a two-day festival on Feb. 8 and 9 at the Viet Hoa Center on the Sam Houston Parkway. The event featured Justice League and Hello Kitty inflatable moonwalks for the children, face painting, juggling, and a variety of Asian and American foods, plus French pastries.

At Amity Park in Alief, the Texas Lunar Festival presented an entertainment showcase all day Saturday which featured traditional Chinese dances and those that included lions and dragons, as well as Hawaiian, Brazilian and Panamanian dances. The Houston Police Department brought some of their mounted patrol horses to show, and Force EMS gave the public a peek inside one if its ambulances. Food offerings included turkey legs, sausage on a stick, roasted corn, “sandy candy,” and goodies from the Jamaican Patty Factory.