It has been 45 years since helicopters descended on the U.S. embassy in Saigon to evacuate stranded Americans and Vietnamese people as the city fell to the People’s Army of Vietnam and the Viet Cong in April 1975.

When the dust of war settled, more than 2 million lives had been lost, including over 280,000 U.S. and allied soldiers. Their sacrifices have not been forgotten, and the Vietnam War, which took a total of 1.3 million lives, echoes into American politics and culture to this day. 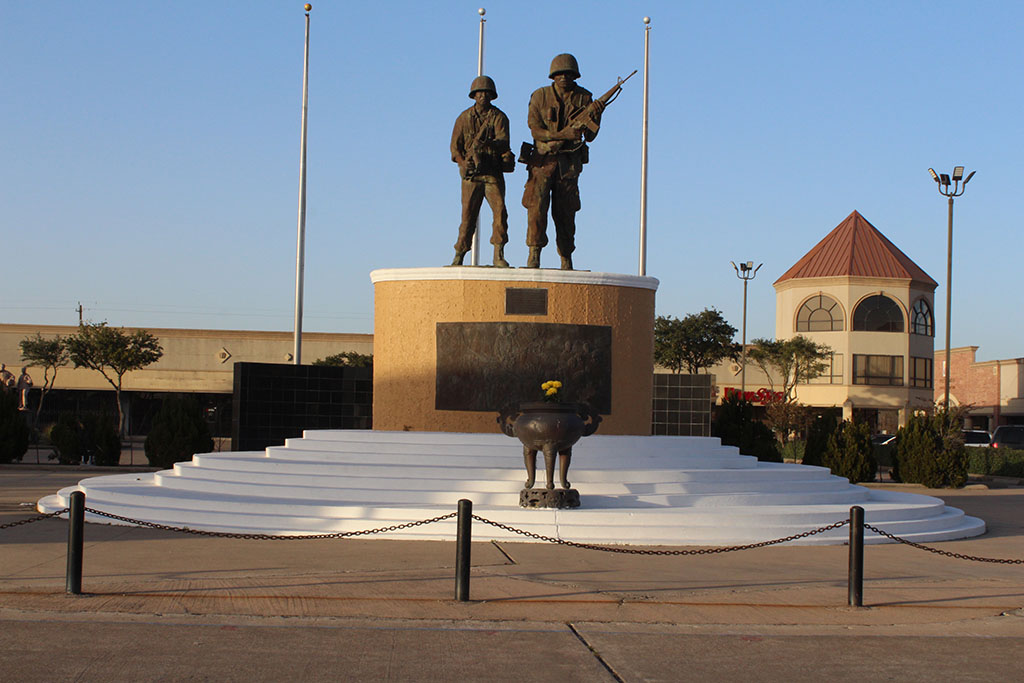 In a parking lot along Bellaire Boulevard, the likenesses of a South Vietnamese soldier and an American fighter stand side by side, holding assault weapons, their eyes searching the horizon.

The 27-foot copper statues stand proudly at the Vietnamese War Memorial located at Universal Shopping Center, 11360 Bellaire Blvd., in the International Management District. They were sculpted by the late Houston-based artist Thong Pham.

“The memorial brings lots of memories to our people, especially those involved with war,” said Joseph Do, a third-generation Vietnamese American who is executive director of the Vietnamese American Community Center in Houston. “It’s good to have a memorial to remember the sacrifices of those who served and lost their lives in the war.”

The soldiers’ oval pedestal, which sits atop nine steps – a lucky number in Vietnam – was designed and constructed by architect Nghiep Nguyen, along with the shiny piece of granite behind them.

The granite wall is home to three flags – from the U.S., Texas, and South Vietnam – that are undergoing restoration in time for the Vietnamese Lunar Year, or Tet Holiday, on Feb. 12, said Thuy Thanh Vu, who serves on the board of the International Management District.

Construction of the memorial began in 2003, funded by donations raised by Nguyen with the help of the Vietnamese and Allied Defenders Memorial Foundation. Nguyen formed the nonprofit foundation to help Pham achieve his goal of creating the memorial.

The donations came from Vietnamese Americans, businesspeople and individuals. The cost of the copper, building the bases and hiring a crane to help move them to their new home was about $350,000. 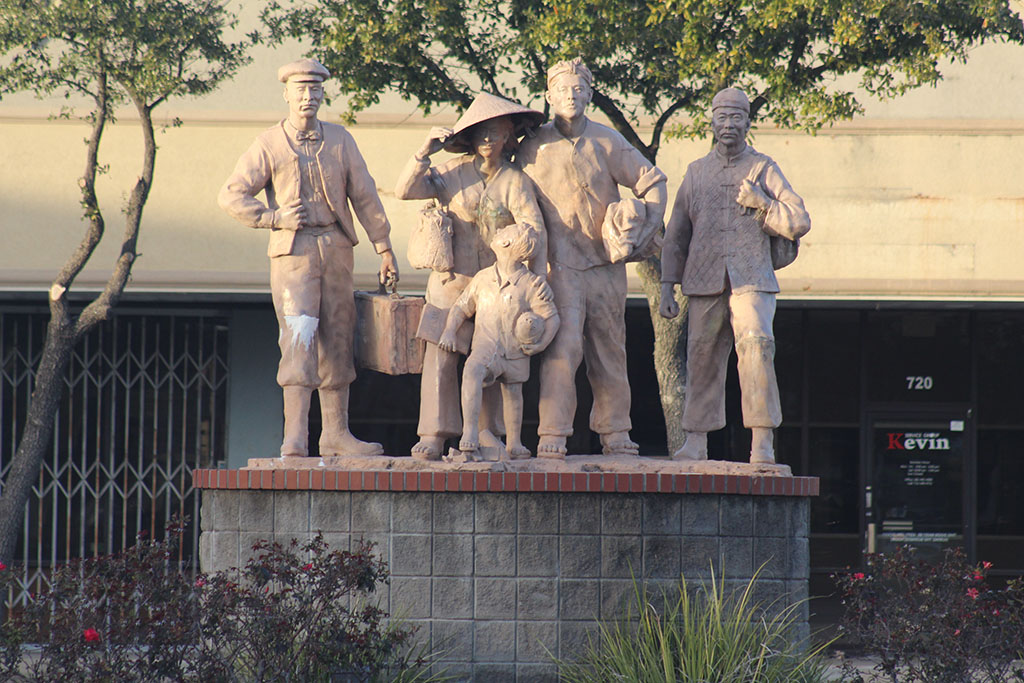 Since its debut in 2005, the memorial has been one of Little Saigon’s most prominent landmarks. Just a few feet behind the memorial are five smaller statues, 15 feet tall, that Pham designed to remember Vietnam War refugees with the theme, “hope and freedom.”

Today, Vietnamese Americans are a vibrant part of the Houston’s cultural, economic and restaurant landscapes. Many are active members of Christ The Incarnate Catholic Church on Kirkwood, Saint Francis de Sales Catholic Church on Bellaire Boulevard and other churches.

Vietnamese Americans of the Buddhist faith convene at Vietnam Buddhist Center on Synott in Sugar Land, at Vietnamese Buddhist Pagoda Phat-Quang on Arizona Street, and other Houston-area temples.

Serving the local community in the Vietnamese language are radio programs, a TV station and newspapers.

For Vu, the Vietnam War Memorial is an important link to the past for young Vietnamese Americans.

“The memorial is a very significant place with good meaning to the younger generation,” she said. “Many pause a minute to pay their respects. I hope they will pass that (reverence) on to their children.

“It’s important that we have a site like that,” she added, “not only to remember our own fallen heroes, but the Americans who fought besides us. Many have sacrificed without being recognized and appreciated.”