The food court at Hong Kong City Mall is truly a foodie’s destination due to the heavenly aromas coming from the expanded line-up of kiosk-style restaurants.

I spent a recent Saturday touring the assortment of great recipes and flavors. 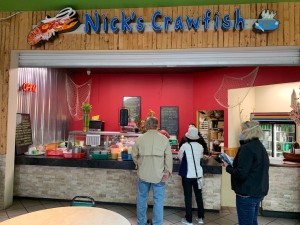 First stop was Nick’s Crawfish, owned by Nick Nguyen. His special recipes include Cajun flavors mixed with Asian ones to create sauces that absolutely saturate his fresh seafood and make the tastes pop.

“For our extremely spicy lemongrass sauce, we use lots of onions, lemon, lemongrass, butter, and seafood sauce with a kick of cayenne pepper from a little to a lot, for extra spicy,” Nguyen explained. “Of course we use a lot of garlic, too.”

Aside from his trademark spicy lemongrass sauce, he also gives an impressive list of options with other sauces, including: “sticky citrus mango basil,” garlic butter, sriracha butter, pineapple butter and cilantro ginger butter.

Although crawfish is his hot seller, there is a full array of seafood available including mussels, oysters, shrimp, crab and squid – all with choice of his special sauces.

He offers Door Dash, Uber Eats, and other options for delivery.

“We have several long-lived specials that we are known for,” the very friendly Nguyen said. “Try them all to get lucky!”

Right next door is Anna Thai Food, where owner Anna Usa Songsart prides herself on serving authentic Thai food along with an assortment of imported food goods. It is a rave-reviewed restaurant on the internet as well.

“Our customers know they will get Pad Thai or Massaman or Tom Yum Koong soup, and it will be the real thing because we cook authentic Thai,” Songsart said. “People come to us from all over Houston.”

For customers who like spicy Thai, she uses an imported chili paste with soy bean oil. For creamy dishes she uses a Tom Yum cream soup base, along with coconut milk. Add lots of fresh ingredients such as mushrooms, lemon, green onions, and assorted vegetables, along with Thai noodles.

Soups are very popular along with a wide selection of curry dishes.

Aside from a delectable menu of Thai delights, the colorful storefront boasts a variety of imported Thai snacks and food products.

Songsart also welcomes all delivery services and feels fortunate for her loyal base of customers who come regularly to eat in the food court or take it out. 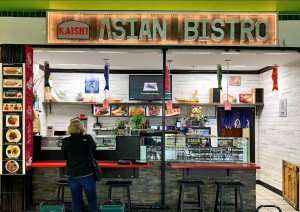 Food is prepared in typical Japanese style with seafood offerings of salmon, tuna, red snapper, and even octopus. That means that teriyaki, and tempura dishes are plentiful.

For those craving yummy Vietnamese sandwiches, head to Phi restaurant, further into the mall. 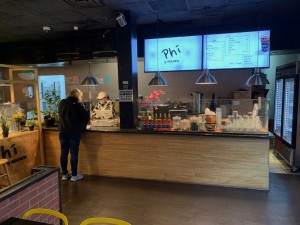 Owned by Phillip Phan, the cafe features sticky and broken rice in their sandwiches, filled with pork ribs and other kinds of barbecued meat. They also boast a wide array of Vietnamese coffees and Thai green tea.

For sweets or a snack, there’s also Cane Island, owned by Hanh (Tina) Chau, offering homemade waffles to order in flavors that include taro, durian fruit, their famous green pandan leaf, and strawberry, among others. One whiff of steaming, flavorful waffles lures from several stores away, as there is always a hot waffle on their many griddles. It is hard to resist once you get close by, and the taste is worth it, too.

Cane Island’s other specialty is sugar cane juice combined with fruit flavors such as passion fruit, coconut, kumquat, kiwi and even grapefruit. 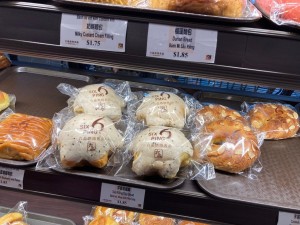 Last stop of this day’s culinary tour was a mandatory visit to Six Ping Bakery, which offers a large variety of popular meat breads such as bacon bread, fried pork bread, red bean bread, and even ham and cheese bread. Many of the breads are shaped in whimsical animal forms.

Their assortment of sweets cakes is an even longer list of flavors including egg yolk vanilla cake and fruit-topped cakes.  For birthdays or occasions, they offer fun cartoon character cakes such as a Hello Kitty cake and an Angry Bird cake – both big sellers.

When the day and tour were finished, the many flavors, textures and tastes had me anxious for a quick return trip.