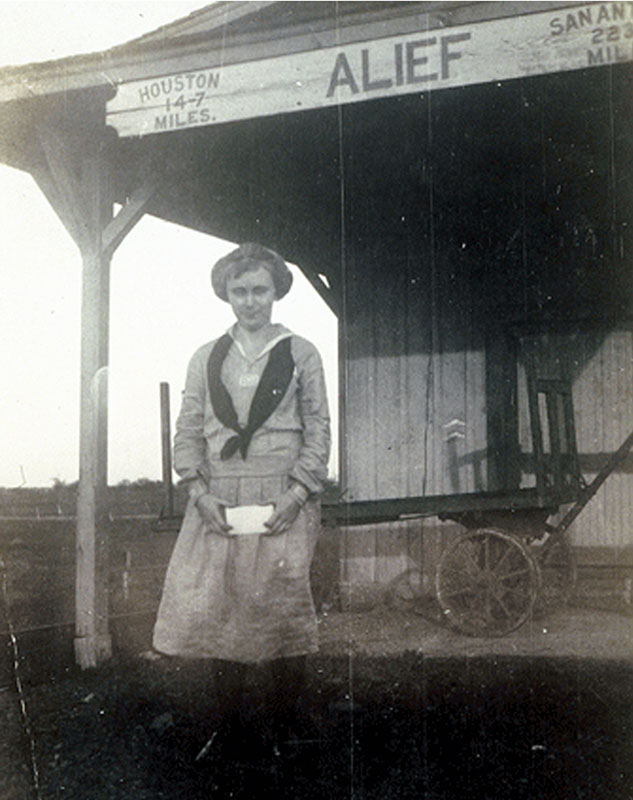 Thanks to a fierce pride of place and assiduous record-keeping, the early history of Alief is well-known, from the Reynolds Reynolds land grant through the town’s short existence under the much less-evocative name Dairy, Texas and up through the rains of 1899 and the Great Storm of 1900. The change brought about by those cataclysms had profound and wide-ranging effects — they played a key role in bringing about rice cultivation in Texas and in the creation of the Harris County Flood Control District — but the implications of those developments would not manifest themselves until the 20th Century. And here I’d like to write a little bit more about Alief / Dairy’s earliest days, to bring a little perspective on how the fledgling community fit in with the world around it.

Every Alief historian knows the story of how the town got its name — how Dr. John S. Magee and his wife Alief Ozelda (Morris) Magee moved south from the Texas town of Italy in Ellis County (south of Dallas, Waxahachie is the seat) and how Mrs Magee became the town’s first postmaster in TKTK. But what some may not know is how unusual (or not unusual) it was for a town to have a female postmaster in the 19th Century.

According to the United States Postal Service, it was pretty rare indeed, though slightly more common in the states of the former Confederacy. As of 1899, female postmasters (although “postmistresses” is often commonly used, that is not official USPS nomenclature) oversaw 10 percent of the country’s approximately 7,000 post offices. That percentage was slightly higher in Texas, for as an ex-Confederate state, there was a period of years when no man who’d ever aided the rebellion could by law fill that role. While that ban lapsed in July 1868, it enabled women to move into those roles in large numbers and once given the opportunity, they excelled. An African-American woman, Anna M. Dumas, oversaw the mails of Covington, Louisiana from 1872 to 1885, for example.

In The Story of Our Post Office, published in 1893, Marshall Cushing wrote of the estimated 6,335 women postmasters then working:

“A whole book could be written about the many admirable women who work away with all their tact and business prudence, . . . trying to please their patrons and the Department alike, and pleasing both because they try. . . . Sometimes they are the most important persons in their towns.”

That certainly seems to have been the case of Alief Ozelda Magee, although she saw her own life with a certain modesty she carried into eternity. “She had done what she could,” reads her tombstone in the cemetery that bears her name.

In a modern-day community that has provided sanctuary for tens of thousands of people fleeing Communism, it’s striking to learn that one of Alief’s first citizens was an ardent Marxist. Way back in 1899, long before the Russian Revolution and America’s Red Scares, one JB Welburn of Alief was fiercely defending Communism. In a Houston Post letter to the editor, Welburn differentiated Communism from the then more common agrarianism movement — one that prioritized farmers and their needs and lionized them as the noblest Americans of all — and socialism, which Welburn believed “would only result in a centralized despotism like we already have, and more so.”

Welburn’s Communism was far from godless — to him, it was the essence of Chrisitanity, and he preached his message with messianic zeal. “So long as a hog is a hog and not transformed by the teachings of Christianity,” he wrote, “there must be a fence between stockers and feeders…The Bible teaches Communism. It is the great fundamental doctrine of Christianity. If the divinity has revealed an inspiring remedy for our social diseases in his inspired book, then it is a brutal insult to God to try any other.”

“The colonial fathers tried to settle this continent as communities, and whatever of excellence or superiority this Nation has over others, is owing to approximate Communism. The common school system, the right of suffrage, the bankrupt and homestead laws, etc., are in evidence, all are approximately communistic.”

While Communism would become anathema to most Americans following the Russian Revolution and the first Red Scare of the late nineteen-teens, Marxist ideas were not considered all that extreme, especially on the prairies, from Texas north to Canada, where the farming populace felt themselves at the mercy of Wall Street’s whims. Communism was part of a wider leftist populism that also included agrarianism, socialism, the drive for free silver, all of which culminated in the political career of William Jennings Bryan, a.k.a. “The Great Commoner,” the country’s failed Democratic candidate for president in 1896, 1900, and 1908.

Illustrating the old dictum that the past is another country, Bryan’s leftist campaigns were universally adored in the South and West, today’s most conservative regions.