Working Toward a Greener, Cleaner and more Attractive International District

Since 2007, International District residents have been able to say, “the grass really is greener here.” With the creation of the district 13 years ago, local volunteers and community organizations banded together with business owners to create greenspaces in many shapes and forms. One volunteer working behind the scenes since the beginning is Environmental & Urban Design (EUD) Chair and ID Board Member, Karen Loper.

“An important charge of our committee is to create a good environment to promote business growth, and for people to want to live here,” says Loper. What this mission quickly developed into was an investment in the natural landscape of the district. With the support of the district board, the EUD committee has secured grants from corporations, city programs, and worked alongside Alief community volunteers to put some green back into this urban neighborhood.

“One of the first things we did was adopt most of the district’s medians from the city,” says Loper. This decision placed responsibility for keeping medians mowed and full of life in the hands of the International District. “Beforehand, a lot of medians had very few trees. But we really believe in trees,” says Loper.

Initially acquiring trees through the Trees For Houston program, and receiving a grant for several hundred more trees, the committee hired a landscape company and installed irrigation systems where possible on several of the medians. “That’s the challenge,” says Loper, “every time you plant something, you have to maintain it, too.” This is a commitment that is still fulfilled consistently, with crews hired to water, plant, trim and keep the medians attractive. Over the years hundreds of trees have been planted and more are planned. 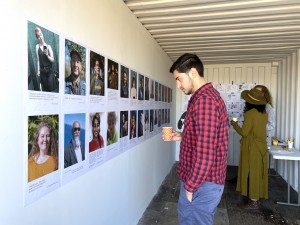 Thanks to the district’s partnership with Alief ISD, the EUD has utilized a portion of the Spark Park on Diary View across from Youngblood Intermediate School as a tree farm, raising future trees that will add their own breath of fresh air to the neighborhood. In addition, the park is home to a community garden which has 74 beds. The Spark Park also hosts the district’s annual Kite Festival and the Fall Festival, encouraging family fun of all kinds, and intended to bring people together. A small dog park may also be in the works for the property, a facility desired by locals.

Keeping the community clean and free of litter is another essential role of the EUD. The committee hired a crew which picks trash up from the medians and public right of ways daily. “They give us a report of their work every month, and it’s astounding,” says Loper. “In 2019, they picked up about 15 tons of trash. They consistently pick up between 2,000 to 3,000 pounds of trash every month.”

The same crew also removes and disposes of bandit signs – the advertisements stuck in the ground on medians and other right of way areas. “That was always a huge problem out here. Now, they don’t last very long,” comments Loper. “In 2019, our crew collected over 2,100 bandit signs. Even politicians don’t put up signs on public property because they know we’ll take them down!”

Along with trash comes the related problems of illegal dumping, overgrown lots, damaged traffic signs and more. Ariel Robinstein became the on-the-ground hero behind the cleanup efforts around the district. “She knows the district like the back of her hand,” says Loper. “She finds sites that need attention, reports them to the necessary people, keeps track of them, and follows up.” This program has made a difference.

With trees planted, and litter picked up, the other blight that the EUD has been tackling since the beginning is graffiti. “We used to have a lot of graffiti problems. Graffiti was everywhere; on street signs, and buildings. So we started a graffiti program,” says Loper. The EUD hired a company tasked with monitoring the area for graffiti, and responding to reports. “You don’t see graffiti lasting in the district for more than 48 hours.”

With dedicated crews and individuals ready to act, the International District also relies on reports from community members to alert them of situations that need to be handled. “If you see a streetlight out, unless someone calls to report it, the electric company won’t know it’s out,” Loper mentions as an example. Being an active community member by reporting concerns is a huge help in promoting an inviting, as well as safe, community. 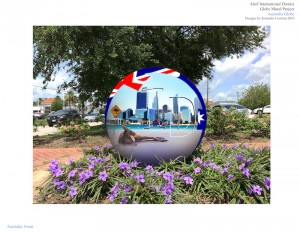 The EUD’s work to beautify the area has naturally begun to draw on the talents of local artists. The stylistic red metal gardener at the Spark Park was the first of these projects, and was created by local businessman and well known Houston metal sculptor, Eric Ober. Also at the Spark Park, artist Matt Manalo recently organized a series of Alief-centered art activities which involved the community.

The 22 “ID” globes placed on medians throughout the district are currently being redesigned and painted by artist Armando Castelan to celebrate the diversity of Alief. Artist Thomas Tran collaborated with the district as well as the Houston Arts Alliance to create a mural on Bellaire representing the various mascots of Alief schools enjoying a picnic with a diverse cuisine. The EUD looks forward to the next opportunity to create murals and art installations around the district.

Through planting trees, picking up litter, working with locals and keeping public areas as beautiful as possible, the EUD sets a high standard for civic responsibility in the International District. As Karen Loper leads the EUD into 2020, she expresses her overarching hope that their work will facilitate community-building and bring neighbors together and foster a better business environment. If you would like to join the efforts in any way, please attend a public EUD meeting at the district offices which occurs every second Thursday of the month at 1:00PM.