Something Delicious is Boiling on Beechnut 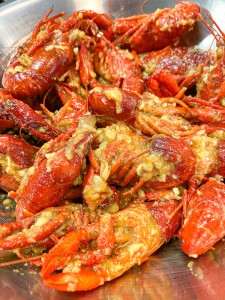 The closer you are to Louisiana’s Atchafalaya River Basin, the better your chances of eating some of the nation’s best crawfish. (Take note that we did not say “crayfish,” or “crawdad,” as they are referred to in states outside of the South). As Houston sits a couple hundred miles of Gulf Coast away from the basin, we have been granted easy access to this seafood goldmine.

“Our crawfish vendors are all from Louisiana,” says Carol Pham, owner of Jolynn’s Crawfish in the International District. Live (never frozen) crawfish are being trucked from Louisiana crawfish farms to the Bayou City by the pound now that crawfish season is underway. The beginning and end of crawfish season varies from year to year, depending on warmth of the weather and rainfall.

“Crawfish are still in the molting stage at the beginning of the season in January, so they’re smaller with softer shells,” explains Pham. “The warmer it is, the more they grow.” To a point; once the stifling south Louisiana summer hits, the crawfish retreat back into their mud-huts. Since many times the biggest complaint about crawfish is the effort it takes to peel them, Gulf Coast crawfish-eaters can count on yielding the biggest rewards in April and May. 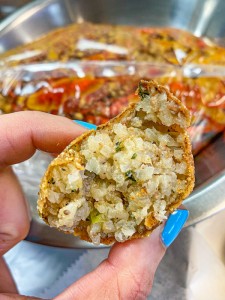 “Jolynn, the original owner, only used to keep the restaurant open during crawfish season,” says Carol. “In the past year that my husband and I have owned the restaurant, we’ve added menu items like boudin balls, popcorn shrimp, wings, and more, during the off-season so that we can stay open year-round.” And the boudin balls are a must; the meat is mixed with rice and seasonings, fried, and absolutely delicious.

Jolynn’s prepares a style of crawfish that Houston is famous for: Viet-Cajun crawfish. It wasn’t until the 1970’s that Houstonians began indulging in the custom of boiled crawfish at all, and only about 20 years ago that the Viet-Cajun style of crawfish made its debut on Bellaire. From there, it has made a name for itself around the United States as a new fusion sensation.

That’s why at Cajun crawfish boils, crawfish is simply scooped up with a strainer and unloaded on the table in front of you—while Viet-Cajun crawfish is presented in a plastic bag laden with crawfish soaked in the flavors chosen by the hungry customer.

A garlic-dotted, buttery sac of crawfish will arrive at your table for you to dump ceremoniously into your metal bowl, if you order either Jolynn’s Garlic Butter or “Mixed” flavor options. The “Mixed” option packs the most flavor by combining Cajun seasonings (paprika, cayenne, pepper, garlic, onion and more), with the other flavor profiles available: Garlic Butter, Thai Basil, and Lemon Pepper. Choose what level of spiciness you’re ready for, and wait for your crawfish to be freshly prepared. 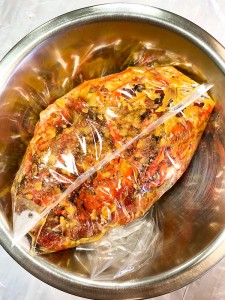 Cracking into the crawfish and freeing the plump tail from inside the shell, you have the option to dip the meat into the pool of delectable sauce, scooping up bits of garlic with every bite. It’s decadent. It’s something that we wait eight months of the year to do. And it’s uniquely Houstonian.

“The flavors keep people coming back. Our customers are loyal. They often talk about how long they’ve been coming here, and I know them by name and order,” says Pham. Owning a restaurant is something that Carol and her husband had always dreamed of doing. Now that they are living that dream, she is waist-deep in the purchasing, maintaining inventory, receiving deliveries, all before the doors open to customers each day.

“You might not know it from the outside,” she laughs, “but give us a try, especially if you haven’t tried Viet-Cajun crawfish before, and you’ll be surprised.” As long as you don’t come on a Tuesday (they’re closed), Jolynn’s might just end up being your go-to Viet-crawfish fix this year.