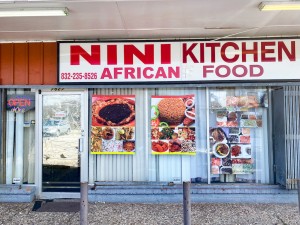 Almost always, the best possible version of a specific type of food is found first in the homes of the families who have been creating it for generations. Outside of the home, the places serving food that makes you think of grandma’s cooking are oftentimes in the smallest, most humble of restaurants, that fly under the radar of the “top 100” lists that they fully deserve a spot on. Nini’s Kitchen in the International District is no exception, serving up West African food in a small strip center not visible from the nearest thoroughfare, Beechnut.

You’ll know you’ve arrived at Nini’s when you see the sign stuck in the ground next to Cook Road reading “African Food” with an arrow leading you into the parking lot. Large red letters advertising “NINI KITCHEN AFRICAN FOOD” and pictures of colorful Nigerian dishes posted on the front windows indicate that you’re in the right place. 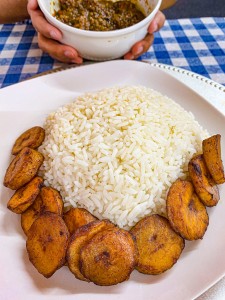 The modest space consists of several tables, a shelf with a number of African products, a serve-yourself refrigerator of drinks, and a TV which played melodious Qur’an recitations as we sat down around a blue checkered tablecloth. Although a majority of Nigerian immigrants to the United States are Christian, over a third of them practice Islam.

Lucky for us, and others new to Nigerian food, the menu has photos of the dishes, so we can get an introductory idea of what we’re ordering without utilizing Google, even if it’s still a relative surprise when the dish arrives.

For those of us raised in the south, glancing through the menu of items with origins in West Africa is not as bewildering an experience as you would think. Many ingredients are common between our cooking styles and palates, despite differences in preparation.

Yams, candied and eaten at Thanksgiving in the south, are on the menu at Nini’s in the forms of yam porridge, and amala. Amala is a dough made of yam flour formed into a ball, and at Nini’s, is eaten with Gbegiri, a yellow bean soup, Ewedu, a green soup made from Jute leaves, and Efo Riro, a spinach stew. All together, this makes for a colorful reddish-orange, yellow, and green plate, the three colors seen in many African nations’ flags. 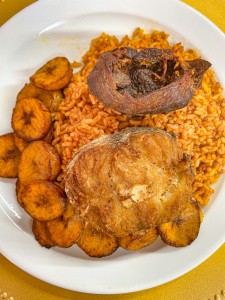 Okra is another familiar ingredient that takes a starring role in Nigeria’s okra soup, with meat or seafood. Catfish, rather than fried or in a poboy is enjoyed smoked and grilled on a bed of red and orange jollof rice. Jollof rice is probably the most famous of Nigerian dishes, and a point of pride for the country, and something you should make sure to order at any West African restaurant. Again, for a southerner, it has some cross-over in my mind to jambalaya, as they are both made with tomato paste, onions, spices, and vegetables depending on the chef.

Eating at Nini’s will doubtlessly involve consuming a soup or stew, of which there are many in Nigerian cuisine. In addition to our delicious jollof rice topped with wonderfully seasoned catfish and a side of fried plantains, we ordered the “Designer Stew” which came with white rice and more plantains (there are never too many plantains). This variety of spicy, dark green stew contains green bell peppers, habanero, onions, beef, beans, seasonings, and a major export from Nigera: palm oil. Any African grocery store in Houston will have an aisle with more shades of orange and red bottles than you could put a name to. Palm oil is an essential part of Nigerian cooking, as well as a large part of the food (and non-food) industry worldwide. 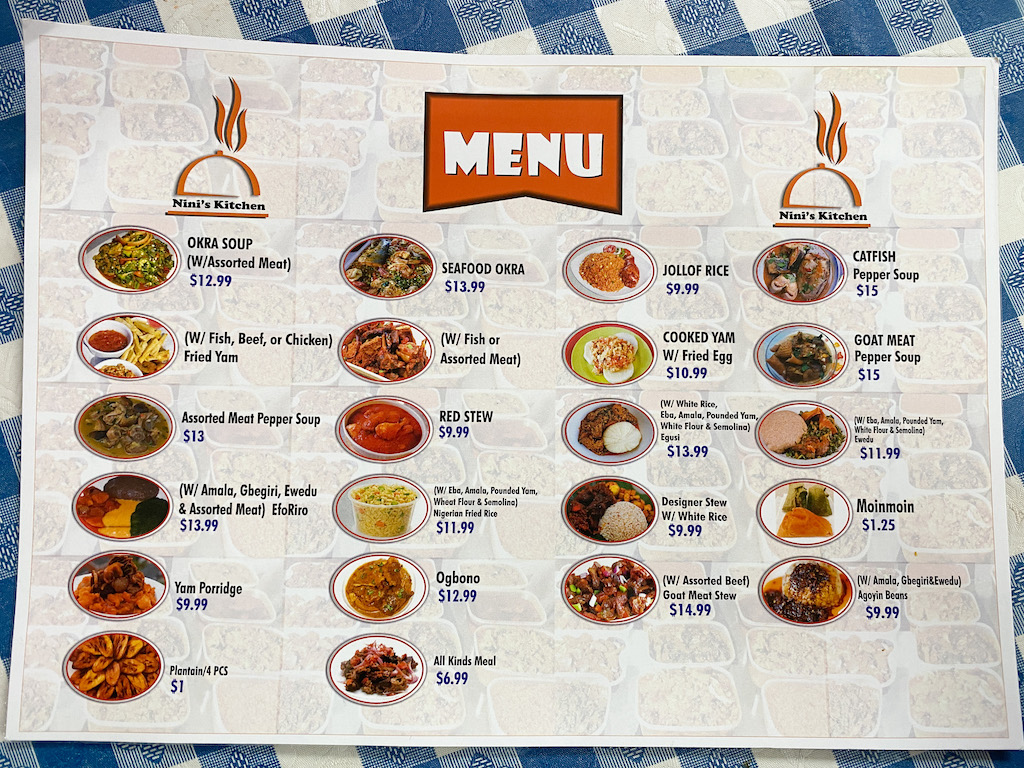