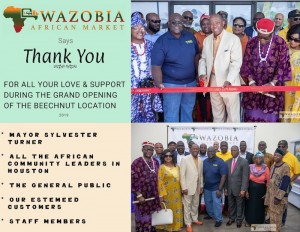 “Come, come, come!” bids Wazobia African Market to shoppers in the International District. “Wa,” “zo,” and “bia” all translate to “come” in Nigeria’s three largest linguistic groups. And grocery shopping at Wazobia translates to having a wide selection of products imported directly from West African countries, Nigeria included. This makes sense, considering the Houston area is home to the largest Nigerian population in the United States, with the Kinder-Rice Institute putting the number at 23,500 in 2016.

A public ribbon cutting ceremony on April 27th marked the opening of this second Wazobia location. The first is located on Westheimer, and owner Tunde Fasina hopes to open eight more stores in the Houston area. Mayor Turner spoke at the event, praising Fasina for his work on behalf of the African community in Houston, not only in regard to his growing grocery chain but his support of African cultural events, providing aid during Harvey, and a scholarship program for high schoolers (Guardian News USA). 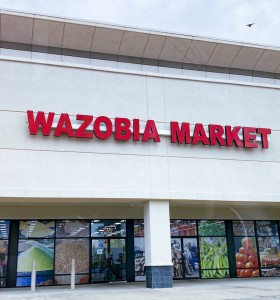 Now, with half a year in the books, customers continue to flock into the brightly lit, neatly arranged market. Once inside, you’ll first notice the shelves of imported items and fresh produce. You’ll walk by a box labeled “Fresh Coconut: $0.99,” with the nutty fruit, as advertised, ripe for the picking. If you are new to African cuisine, walking around Wazobia is like an introduction to a whole new world of cooking that about 370 million people in West Africa have grown up enjoying.

Taking a survey of the product labels, you’ll see countries of origin like Nigeria, Ghana, Cameroon, as well as house-made Wazobia spices, and even products made by immigrants from West Africa living in Texas, such as Omzy’s African Beignet mix. Omzy, originally from Ghana, has found a way to box her country’s “bofrot,” and market to customers from other parts of Africa who call them “puff puffs,” and eat them just as avidly.

Take a turn onto one of the isles at Wazobia and you’ll be faced with a dazzling display featuring more hues of red and orange than you’ve ever seen in one place. This array of warmly colored bottles all contain competing brands of palm oil. Palm oil is a staple in West African cuisine, and a requirement for recreating traditional dishes if you want to capture the authentic flavor. Nigeria is one of the largest producers of palm oil in the world, hence Wazobia’s large selection of this product, which is used for frying, stews, jollof rice and much more. 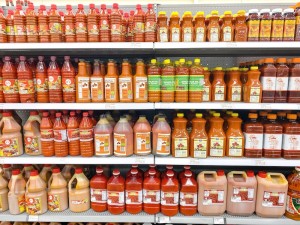 Despite the growing amount of international options in Houston’s standard grocery stores, Wazobia sells specialty African products that you simply will not find in a larger chain. Individuals seeking to reproduce their family recipes can find the grains, spices, and produce that people new to African cuisine never knew existed. Ground Cassava Sticks come in bundled packages, waiting for the right customer who can incorporate it seamlessly into a dish. Sacs of “Garri” flour, made from cassava, are ready for buyers who may use it to create a stew. Palm nut cream is stacked in cans, familiar to African cooks as a necessary ingredient in a popular soups.

If you don’t know where to begin with preparing the ingredients you see on the shelves at Wazobia, the kitchen in the back of the store will prepare any number of West African dishes you’d like to try, as long as you call and order ahead. The kitchen is fully stocked with all types of meats and fish, that are for sale at the butcher’s station. You can even have any fish you purchase fried, for free.

Anyone trying West African food for the first time should order jollof rice and fried plantains, before venturing further outside of your comfort zone with dishes like fufu (pounded yam), goat stew, or suya (spicy beef kebabs). Jollof rice may be the most well-known West African dish, and something that each region proudly touts it’s own, unique version. The base requirements for jollof rice, no matter where you’re eating it, include tomatoes, onions, bell pepper, habanero, herbs and spices, and the ever-popular Maggi cube, a mainstream flavor additive in Africa and other parts of the globe.

As Mayor Turner stated in his ribbon-cutting speech, “The timing for Wazobia African Market could not happen soon enough since the city holds an unprecedented population of vibrant African residents.” Whether you’re coming in for that one ingredient that you can’t find elsewhere, or just to peruse the exotic items at Wazobia, “come, come, come” (and eat, eat, eat) – you won’t regret it!