Skip to content
Home>Community, Community News, IMD News, My International District>An Extra SEAL of Safety in the IMD
Previous Next

An Extra SEAL of Safety in the IMD 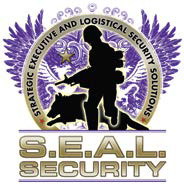 You have doubtlessly seen the distinctive SEAL Security driving through the International District, with white cars branded with a purple, black and gold logo which reads, “Strategic Executive and Logistic Security Solutions.” Operating with a close, collaborative relationship with the Houston Police Department, SEAL patrols the district as an additional asset for preventing and addressing crimes committed on commercial properties.

“We aren’t police officers; we’re here to assist HPD,” explains James Alexander, Director of Operations at the SEAL headquarters. “All of our crime reports go straight to HPD. We are glad to be a second resource in the community,” he says.

If an emergency situation occurs within the district, 911 should be the first call made. SEAL officers will call 911 themselves if they arrive at the scene of an emergency. However, lower-level crimes that threaten business are offenses that can oftentimes be “handled by SEAL without having to call a police officer, which saves the city resources,” says Alexander. 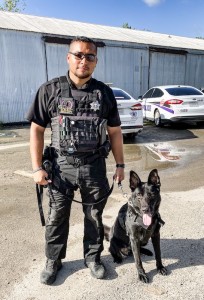 SEAL specializes in crime prevention by being a constant presence in the International District (IMD). “Our goal is to deter crime before it happens. We would rather be proactive than reactive,” states Alexander. SEAL officers are able to dedicate time to building trust with the business owners whose properties they patrol, to familiarize themselves with the needs of the community and to ensure that individuals are comfortable enough to call upon them when needed.

“By building relationships with businesses, and familiarizing themselves with criminal activity in the community, SEAL can provide additional intelligence to police when necessary,” says Brian Burks, Deputy Executive Director of IMD. Burks has seen firsthand the positive impact that SEAL has had on the district.

“From the perspective of IMD, we appreciate the high level of professionalism that SEAL brings to the table,” says Burks. “Many of their officers have military backgrounds, and are professionally managed, under strict protocol and training,” he adds.

Retailers around the city such as HEB have utilized SEAL Security personnel and SEAL cameras in their parking lots and store properties. Store owners have found that having these physical symbols does a great deal to deter crime on their properties.

One of SEAL’s greatest visual deterrents is their trained, canine security team. All SEAL patrol cars are outfitted for taking their canine partners along for the ride. “All of our officers are canine certified, and all of our cars have kennels in the back seat,” states Alexander. SEAL dogs are typically highly trained German Shepherds bred in the Czech Republic. The 68 dogs understand and respond instantly to Czech, German, or Dutch commands, which officers are also trained to give. 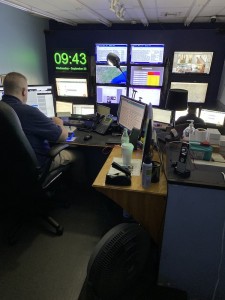 “Having these canine partners is a great non-lethal way of protecting the officers and deterring crime,” says Alexander.

Although these 4-legged security officers have their own kennel space at headquarters, “they go out on patrol every day,” says Alexander. “They’re paired up with the same officer every time. When they’re here, they eat high-protein diets, and are examined daily by the vet,” he says. Wax is applied to the dogs’ paws to protect them from injury, as is a common practice for working dogs. Officers train with their dogs weekly to maintain top form and bonds with their canine companions.

SEAL’s Operations Center in their headquarters operates 24/7, taking calls in a similar fashion to a 911 dispatch center, and monitoring security footage of shopping centers that they partner with. Operations Center personnel are able to dispatch SEAL officers, police officers, firefighters, and EMS.

As every dispatcher knows, a critical part of keeping Houstonians safe is effective communication. “We have access to a phone service that connects dispatchers with interpreters speaking over 200 languages, within seconds,” says Alexander.

“Last year, we received over 100,000 calls from around the city,” says Alexander. Every call that comes in is recorded in order to go onto police records.

Within the Operations Center, SEAL cars are tracked and plotted on a digital map every 4.5 minutes, with map dots showing the speed at which the officer is moving. This constant patrol allows officers to have a remarkably fast response time to calls that come in around the district. “Many times, we are the first responders to a scene,” says Alexander.

SEAL headquarters also contains its own training and instruction spaces, as well as a gym with workout equipment that gets continual use. A quick and efficient car checkout area was just implemented to increase the already rapid pace at which officers can respond to calls.

“Over the years of patrolling in many management districts, SEAL has developed an institutional knowledge of street policing that you can normally only find within the police community,” says Burks. “They’ve gotten to know the public, business owners, by patrolling, responding to calls, and taking care of community problems.”

In order to contact SEAL Security, call the Operation Center hotline at 832-408-0200. Be sure to say “hi,” and introduce yourself to the next SEAL Security officers you see patrolling the International District!