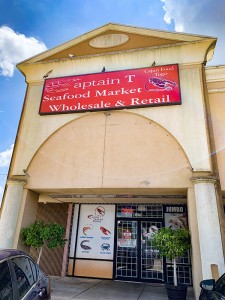 A drive down Beechnut is a crash course in the diversity of Houston. Paying close attention to the businesses running up and down this International District road will introduce you to more cultures than you knew could share one strip of real estate. On this particular drive, our purpose was to test the waters at the notable Captain T Seafood.

Standing in the strip center which contains Captain T Seafood, the “Spark Notes” version of Beechnut can be seen. Crowning the intersection is a new African grocery store, which shares a shopping center with a Taiwanese tea shop, across from a restaurant specializing in food from the city of Hue, Vietnam. A stone’s throw away is a popular spot for tacos, a pupuseria… and the list goes on. But by now, hunger is taking over, and we park at Captain T’s.

Don’t miss it, perched on the corner of the long shopping strip, as we did the first time. A bold red sign announces your destination: Captain T Seafood Market Wholesale & Retail, Cajun Food To Go. Despite their emphasis on “to go,” walking into the restaurant, we were greeted and invited to sit at one of the many tables in the open dining area, that once was a small grocery store. The remnants of the grocery store layout and features are apparent, with serve-yourself refrigerator cases lining the back wall, from which you can grab bottled (non-alcoholic) drinks. To enjoy a beer with your seafood, you’d have to bring your own; Captain T is currently BYOB.

Reviewing the physical menu as well as the slideshow of seafood dishes on the TV monitor, we saw items not typically offered in southern style seafood restaurants. Stir-fried razor clams, Manila clams, Canadian snails, and grilled conch still in the shells caught our attention. The names of each were shown in English as well as Vietnamese. 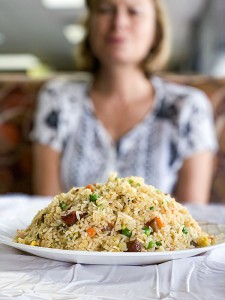 Originating with the Cajun tradition of boiling crawfish amidst spice, the Vietnamese twist on the preparation of the crawfish mostly lies in the variation of flavor and the method of infusion. Rather than simply boiling the crawfish in Cajun spices, the crawfish are then tossed in a sauce that has been prepared separately. At Captain T, the sauce selections are Garlic Butter, Thai Basil, and the Captain T Special: Garlic Butter and Thai Basil. Spice levels range from mild to “atomic,” an experience that we’ll have to try out on another day.

“We get our crawfish from Louisiana,” says our server, and although it was not the heart of crawfish season when we visited, he recommended that we try them. Soon we were presented with the necessary plastic crawfish gloves, a bowl for crawfish shells, and a steaming bowl of boiled crawfish coated with Captain T Special sauce and mixed with onions and cooked lemons. For those who have only tried Cajun style, Viet-Cajun is a must. The freshly made sauces add an extra burst of flavor that compliment without overpowering the taste of the crawfish. 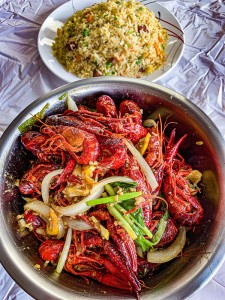 “We just opened back up again two days ago, after remodeling the store,” says our server, when I asked how long Captain T has been open. “But we’ve been in business for two years,” he adds. Much of their business comes from their “to go” seafood offerings, and their popularity during the spring crawfish season. Dishes like Tom Rang Muoi, sitr-fried Vietnamese salt and pepper (and of course chili) shrimp, will keep us coming back in the future for more delicious experiences that contribute so much to the identity of the International District.

In consideration of measures aimed at stopping the spread of COVID-19, staffing of International District offices is limited at least through April 30, 2021 while staff works remotely on a full-time basis. Staff may be contacted as follows: