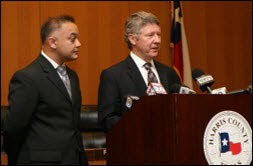 Harris County Judge Ed Emmett and Harris County Public Health Services (HCPHS) Executive Director Dr. Umair A. Shah met with local media members on Tuesday, August 9, 2016, to provide an update on several major developments regarding the state and local responses to the Zika virus. Judge Emmett is a member of the state Task Force on Infectious Disease Preparedness and Response, and Dr. Shah continues to lead Harris County’s efforts to prepare for and combat the potential spread of the virus.

Dr. Shah confirmed the first Zika-related death in the State of Texas. A positive test result was received on a female infant born in Harris County with birth defects, including microcephaly. The child died shortly after being born. The mother had traveled to Latin America during her pregnancy, where it is suspected she became infected, and she later delivered the baby in Harris County. As of now, there are no reports of local transmission.

HCPHS is working with federal, state and local public health partners to monitor Zika activity globally and investigate all locally reported cases. Local healthcare providers are asked to be diligent in testing individuals, especially pregnant women who have Zika-like symptoms and have recently traveled to areas where the Zika virus has been confirmed.

According to the Centers for Disease Control (CDC), Zika symptoms are usually mild and include fever, rash, conjunctivitis (red eyes), and joint pain, lasting several days to a week. Zika can also be transmitted sexually. CDC has confirmed Zika is linked to birth defects. There is no vaccine to prevent or medicine to treat Zika virus infection.

The Harris County Public Health Zika Readiness Team was created in January 2016 and consisted of representatives from across the public health department to assess the Zika situation in Harris County and to plan appropriate response efforts. Multidisciplinary teams were formed, trained and exercised March 11 and April 7, 2016. To date, $1.1 million has been spent on Zika response efforts by HCPHS.

Area residents are urged to remove potential mosquito breeding sites around their property. And, everyone is urged to protect against mosquito bites by using insect repellant or wearing clothing that covers exposed skin.

For more information on the Zika virus and what you can do to protect yourself against the virus, please visit www.hcphtx.org or www.cdc.gov.