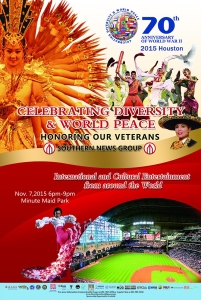 Listen to the voice of the world – it is a multi-ethnic composition – a peace overture.

Celebrating Diversity will reflect the diverse international cultures that have come to be an engrained part of the very essence of Houston. That we are not only the Energy Capital but we are a major International melting pot of what makes Houston what it is today. The International Trade Center and Southern News Group will be sponsoring the overall operation and implementation of the event, Celebrating Diversity and World Peace is the theme of this event.

The war broke out in 1939 and ended in1945 and was the largest war in modern history, with more than 100 million military personnel being mobilized and directly involved in this world conflict. There were a total of 50 million to 70 million deaths caused by the war — the largest number of deaths in the history of war.

Recently, the 69th United Nations General Assembly adopted by consensus a resolution to commemorate the 70th anniversary of World War victory. It is well-documented in many ways and the truth remains that World War II for all countries, especially in Asia, Europe and other regions caused untold suffering to millions of people. On June 26, the United Nations will commemorate the signing of the United Nations Charter of 1945, marking its 70th anniversary. The organization was then chartered on October 24, 1945.

As an organizers of the event, International Trade Center and Southern News Group held their first Celebrating Diversity event at Hobby Center in 2014 when many ethnic groups gathered to witness the many cultural interchanges in a joint development of an important historical moment, and was highly praised by U.S Congressman Al Green, who called the celebration “a model of American society.”

The peace and diversity event will attract over 40,000 multiple ethnic people including Jewish, Asian, Latino, African and they will represent the wishes of the whole world, listening to the many voices from the diverse peoples, while praying for world peace under the same sky.

History cannot be forgotten and the tragedy of war must be remembered. The coming commemoration event will write an important memorable chapter in the history of the development of the diverse city of Houston, Texas.