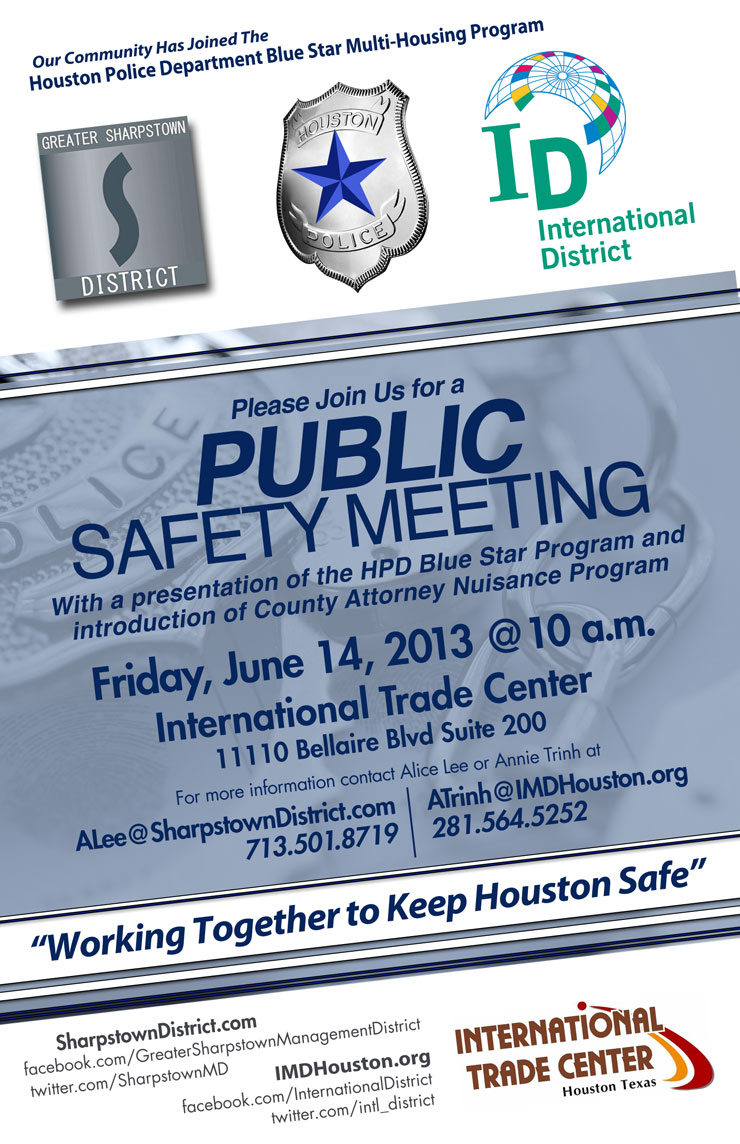 Law enforcement officials, concerned citizens, property owners and representatives from both the International (IMD) and Greater Sharpstown Management Districts (GSMD) met at the International Trade Center on Bellaire Blvd. to discuss public safety initiatives that can benefit both communities.

HPD Officer Mike Prause and Richard Rodriguez, Director of Services and Public Safety for GSMD, gave reports of current crime statistics for both districts. Prause said there had been an overall drop in all crime categories in IMD between April and May, but robberies had increased 9 percent since last year at the same time.

In Sharpstown, burglaries of motor vehicles have increased 22 percent between April and May, and robberies are up 19 percent. Auto thefts have decreased 30 percent; home burglaries have dropped 8 percent and burglaries of businesses have dropped by 11 percent. Rodriguez also talked about the District’s use of mobile surveillance cameras, graffiti abatement programs, and lighting surveys as additional measures to help curtail crime. Paul Reese of SEAL SECURITY, which provides security support for both Districts, gave a report on what his company is doing to reduce burglaries of motor vehicles by walking trained canine units in the areas most affected, such as business parking lots and public parks.

The inspections result in a report of improvements that need to be made to make the property a safer place for residents, and the property owner has a 30-day window to make those adjustments. The final step to qualify is a meeting to notify residents of the improvements. All residents should be willing to sign a lease addendum saying they understand they will be evicted if caught committing a crime on or near the properties.

Harris County Attorney’s Office representatives Celina Vinson and Laura Cahill came to the meeting to discuss nuisance abatement programs affecting businesses and apartment complexes where managers turn a blind eye to crime. Among the common offenders are “after-hours” clubs who continue to serve alcohol after 2 a.m., she said.

“If there is habitual crime on your property, and you knowingly tolerate it, and you don’t take reasonable steps to abate it, you can be sued,” Vinson said. “We want you to be a good neighbor, but we will go to court and ask the judge to make property owners take the necessary steps to comply. Crime brings down business opportunities and the quality of the neighborhood.”

Daisy Flores, an executive with the Boy Scouts of America’s Sam Houston Area Council, gave a brief presentation about the importance of creating troops in local apartment complexes to instill values and leadership skills in at-risk youth. The local programs were described by Brian Burks, IMD Director of Services, as “our Number One crime prevention initiative.”