International Newsletter from the Mayor’s Office 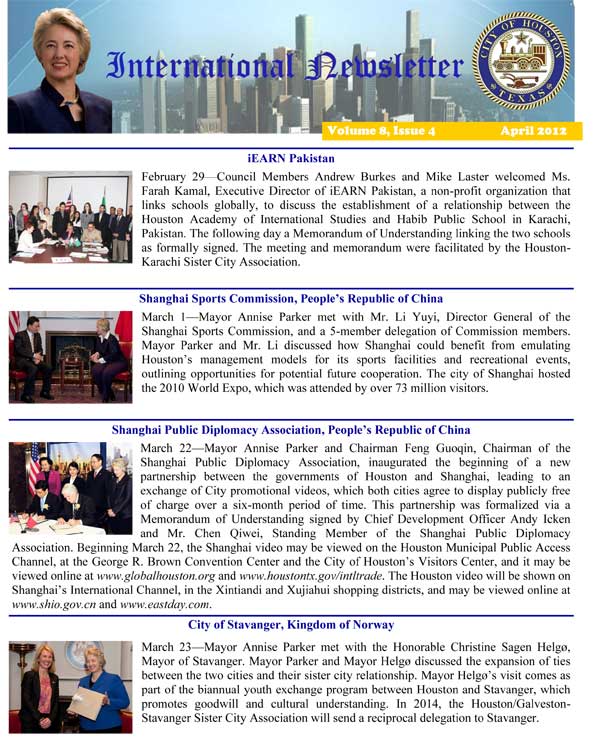 February 29—Council Members Andrew Burkes and Mike Laster welcomed Ms. Farah Kamal, Executive Director of iEARN Pakistan, a non-profit organization that links schools globally, to discuss the establishment of a relationship between the Houston Academy of International Studies and Habib Public School in Karachi, Pakistan. The following day a Memorandum of Understanding linking the two schools as formally signed. The meeting and memorandum were facilitated by the Houston-Karachi Sister City Association.

March 1—Mayor Annise Parker met with Mr. Li Yuyi, Director General of the Shanghai Sports Commission, and a 5-member delegation of Commission members. Mayor Parker and Mr. Li discussed how Shanghai could benefit from emulating Houston’s management models for its sports facilities and recreational events, outlining opportunities for potential future cooperation. The city of Shanghai hosted the 2010 World Expo, which was attended by over 73 million visitors.

March 22—Mayor Annise Parker and Chairman Feng Guoqin, Chairman of the Shanghai Public Diplomacy Association, inaugurated the beginning of a new partnership between the governments of Houston and Shanghai, leading to an exchange of City promotional videos, which both cities agree to display publicly free of charge over a six-month period of time. This partnership was formalized via a Memorandum of Understanding signed by Chief Development Officer Andy Icken and Mr. Chen Qiwei, Standing Member of the Shanghai Public Diplomacy Association. Beginning March 22, the Shanghai video may be viewed on the Houston Municipal Public Access Channel, at the George R. Brown Convention Center and the City of Houston’s Visitors Center, and it may be viewed online at www.globalhouston.org and www.houstontx.gov/intltrade. The Houston video will be shown on Shanghai’s International Channel, in the Xintiandi and Xujiahui shopping districts, and may be viewed online at www.shio.gov.cn and www.eastday.com.

City of Stavanger, Kingdom of Norway

March 23—Mayor Annise Parker met with the Honorable Christine Sagen Helgø, Mayor of Stavanger. Mayor Parker and Mayor Helgø discussed the expansion of ties between the two cities and their sister city relationship. Mayor Helgø’s visit comes as part of the biannual youth exchange program between Houston and Stavanger, which promotes goodwill and cultural understanding. In 2014, the Houston/Galveston-Stavanger Sister City Association will send a reciprocal delegation to Stavanger.