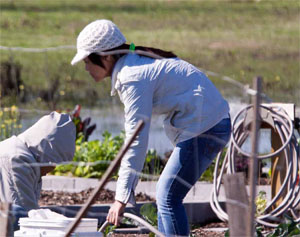 School District for $1 a year. A beneficial garden, compost pile, and leaf bin were built in November and December. Alief Scout troops will build bee hives and bird houses. The Alief Super Neighborhood is currently a finalist for an orchard grant from the Breyer Corporation. The Alief Super Neighborhood Council also won a grant of hardwood trees from the Apache Corporation. In early February, 500 5-gallon trees will be delivered to IMD’s just completed fenced yard that will be the tree farm. The trees will be repotted into larger containers, fertilized and watered until they reach 15-gallon size, and then planted on Alief esplanades.

Spark Park is funding a pavilion for the garden. The pavilion is being designed and built by the students of the University of Houston Graduate School of Architecture and will be placed in the garden in August, 2012. The garden has truly been a community effort and the gardeners reflect the diversity of Alief. In addition to the tree grant, the garden received funding from LISC, Wells Fargo, and the United Way. Community volunteers who are instrumental in developing and building the garden include Twee Nguyen, Gus Munoz, Pat and Logan Martin, Denise Perkins, and Rick Opersteny

We are excited to announce that the Alief Community Garden will have a new pavilion next summer. SPARK (School Park Program) will provide the funding for the project and graduate students in the University of Houston’s College of Architecture will design and build the pavilion. This will serve as a place for an outdoor classroom, garden and other meetings and a neighborhood gathering place.

We have a Tree Farm! Five hundred trees donated by the Apache Foundation arrived at the Community Garden Friday morning. Teacher Erin Gilbert and her wonderful students at Youngblood Intermediate school walked across the street and unloaded every tree in 17 minutes. All the trees are now safely inside the fence that Wells Fargo funded.

Location: Dairy Ashford at Beechnut @ 9am

Click here to learn more about our Community Garden!