Tens of thousands of people from Florida to Virginia are still reeling from the effects of Hurricane Matthew more than a week after it ravaged parts of the South after approaching Florida as a powerful Category 4 hurricane killing at least 43 people in the United States. As I write this 12 days after we opened the first evacuation center for Matthew, some hard-hit communities are now focused on rebuilding, while others are still responding to continued historic flooding. As the waters recede, our preliminary estimates indicate that Florida, Georgia, and South Carolina will be Level 5 operations and North Carolina will be a Level 6.

Before Hurricane Matthew, eastern North Carolina had already seen damaging flooding from heavy rainfall in the past month. With Matthew dumping 10 to 15 inches more inches of rain, the situation escalated into the worst flooding North Carolina has seen since Hurricane Floyd in 1999. In towns like Greenville and Goldsboro and Rocky Mount, in the eastern part of North Carolina, some rivers have crested at record-breaking levels, hemorrhaging water into streets and submerging entire blocks and businesses and homes like this one in Hope Mills near Fayetteville: 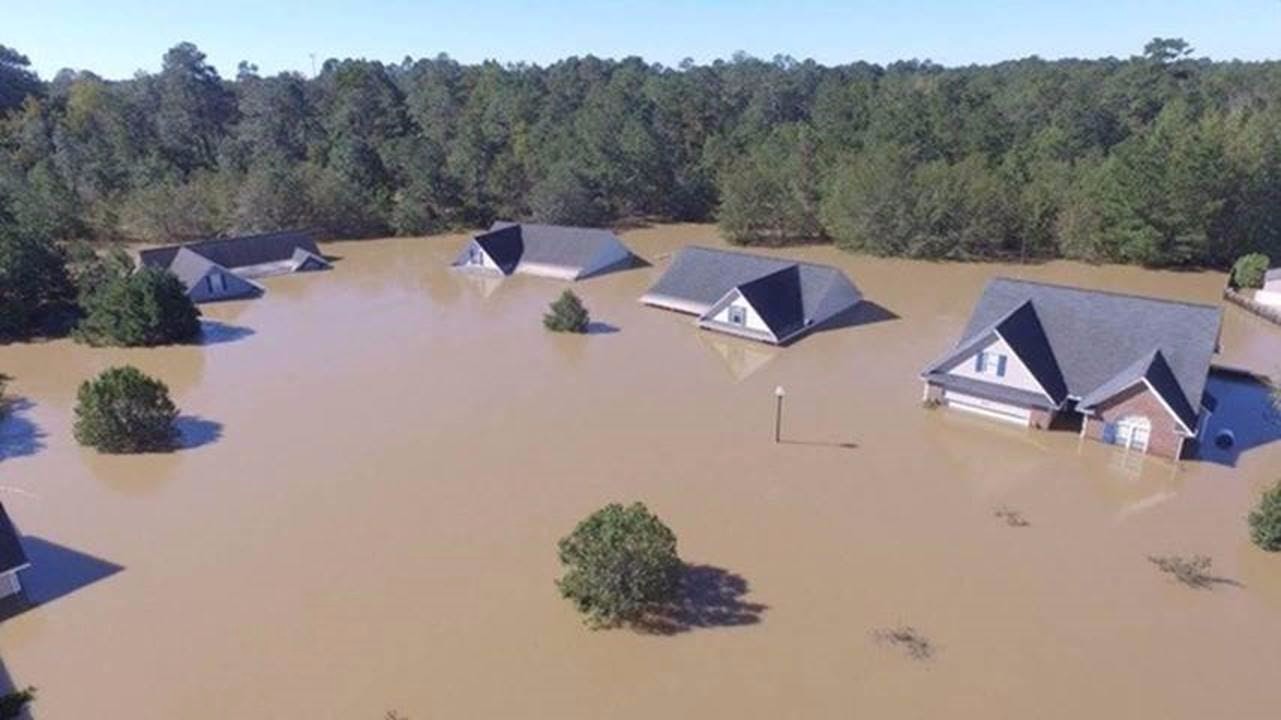 Unfortunately, neither the flooding nor the anguish is over: 7 rivers in North & South Carolina won’t come out of major flood stage for at least another 5 days, and at least one river—the Waccamaw River near Conway, South Carolina—was still rising this morning! 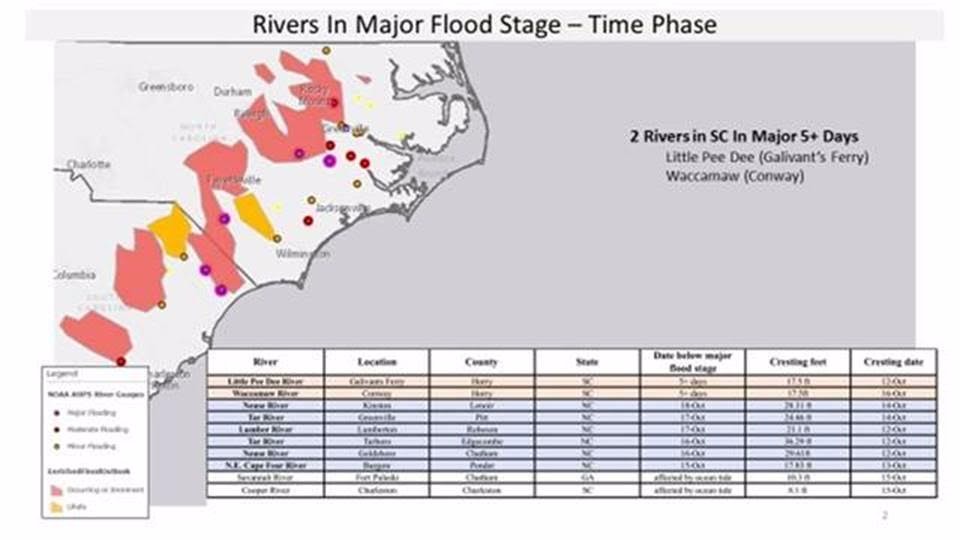 That’s why we still had over 2,000 evacuees in 30 shelters in North Carolina and 183 evacuees in 5 shelters in South Carolina this morning. Nearly two weeks after impact, we still have over 2,300 people in 37 shelters across 4 States, as you can see here on this screen shot from RC View (the blue pins with the letter “S” are current open shelters):

As folks return to their neighborhoods, many are finding scenes like this one in Edison Beach, South Carolina—tons (literally) of debris, destroyed homes, and a long recovery ahead. 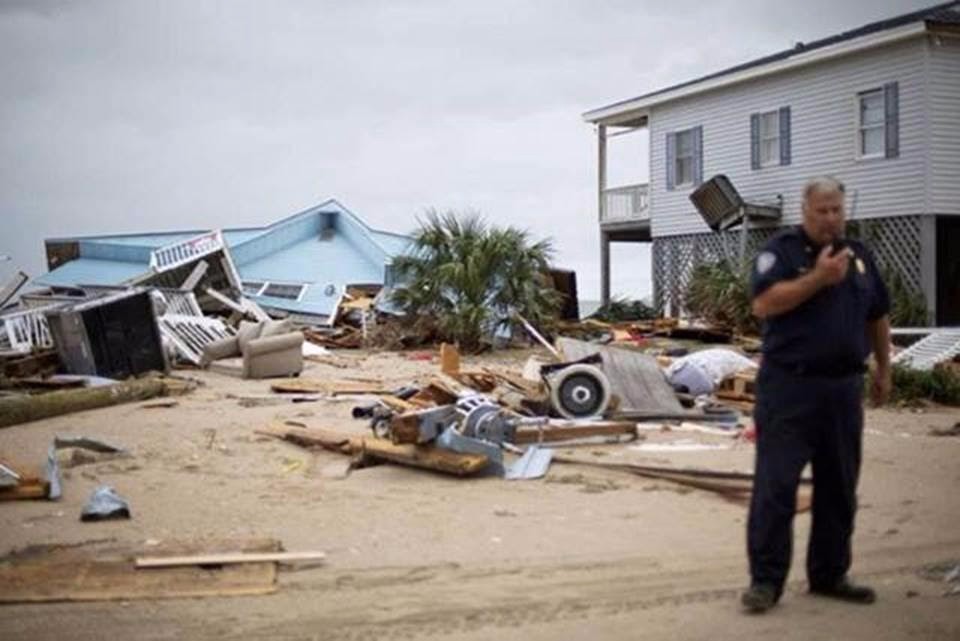 As Matthew was bearing down on the Carolinas, the Yates family (pictured below) evacuated to Dillon, South Carolina from Columbia, South Carolina by bus. “The bus was swaying with the wind and rain, and we had to dodge a pole,” said Nettia Yates, recounting the trip she made during the hurricane. At one point, said Ms. Yates, “the water was almost up to the windows.” Ms. Yates couldn’t get in touch with anyone as she finally got off the bus, and was stranded outside a closed storefront in the storm. As Ms. Yates said, “A policeman came and asked if I was Ok. I said ‘No. I’m cold, I’m hungry and scared. He says, ‘Ma’am, would you be comfortable going to the Red Cross shelter?’ And then it was better.” She smiled. 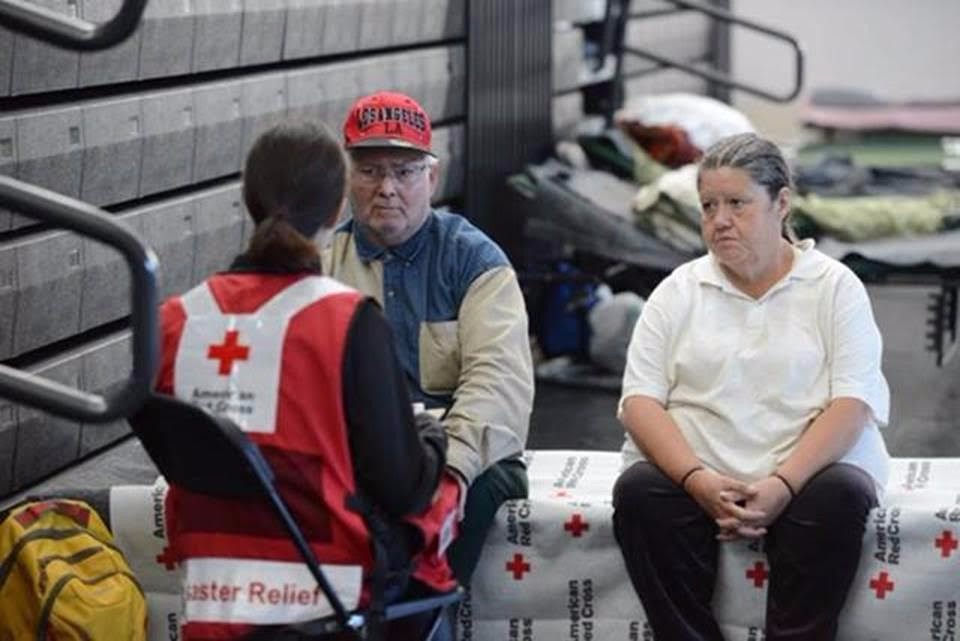 In the past 12 days, we’ve assigned and fielded nearly 5,000 Red Cross responders to Florida, Georgia, South Carolina, and North Carolina to help thousands of people like the Yates’. This morning in hard hit North Carolina alone, where damage assessment is just beginning and many areas remain inaccessible, we have nearly 2,000 Red Crossers providing shelter, food, and comfort. We have another 800+ responders in South Carolina, where preliminary damage assessments suggest that Matthew destroyed or caused major damage to over 3,700 homes.

It’s a worth a minute to put those staffing numbers into context, especially on the heels of major disasters in West Virginia and Louisiana over the past few months. Last year, between July 1 and October 13, we made 6,873 assignments to the field. This year, in the same period, we made 15,632 assignments to the field! That’s 127% more assignments than during the same period last year. The numbers below paint part of the picture of our intense operational tempo for Matthew—so, in the past 12 days, Red Crossers:

· Opened 374 shelters and provided over 90,000 shelter overnight stays
· Served over 750,000 meals and snacks through over 150 fixed and mobile feeding sites
· Staffed over 100 Emergency Operations Centers across 5 States
· Deployed 266 ERVs, including 2/3rds of the National ERV Fleet
· Provided over 135,000 bulk relief items, including over 3,500 clean up kits
· Received over 800 Safe & Well registrations
· Made over 16,000 disaster health and mental health contacts
· Recruited over 2,100 event-based volunteers (that’s incredible—kudos to VP Matt Bertram and his team over 90 deployed volunteer services staff for setting the gold standard even as they’re building new and better processed to support operations)

As always, the Red Cross is part of a larger community of interest serving disaster survivors across the impacted States. First, the Canadian Red Cross responded to our urgent request for assistance by sending staff to help us with critical unmet needs in analysis and logistics, and over 5,000 clean up kits to help offset the overwhelming and immediate demand on our inventory. As you may recall, we recently supported the Canadian Red Cross in their response to the devastating and massive fires in western Canada, and now we are so very grateful to CRC for returning the favor. Speaking of clean up kits and fires, one of the two tractor trailer loads of clean up kits the CRC sent us caught fire en route, which destroyed most of the product. But that didn’t deter the CRC: the sent us replacement clean up kits from another warehouse almost immediately upon receiving the report about the truck catching fire. Really—you can’t make this stuff up. J Staying with partners and clean up kits for one more moment: Enterprise Holdings generously contributed $150,000 so that we could purchase comfort kits and cleanup kits for Hurricane Matthew, including restocking our warehouses since we’ve dramatically depleted our supplies for Hurricane Matthew.

Among other valued partners actively engaged in responding to Matthew alongside us includes:

Here you can see Southern Baptist and Red Cross volunteers working together to prepare and distribute food at the Cedar Falls Baptist Church in Fayetteville, North Carolina. 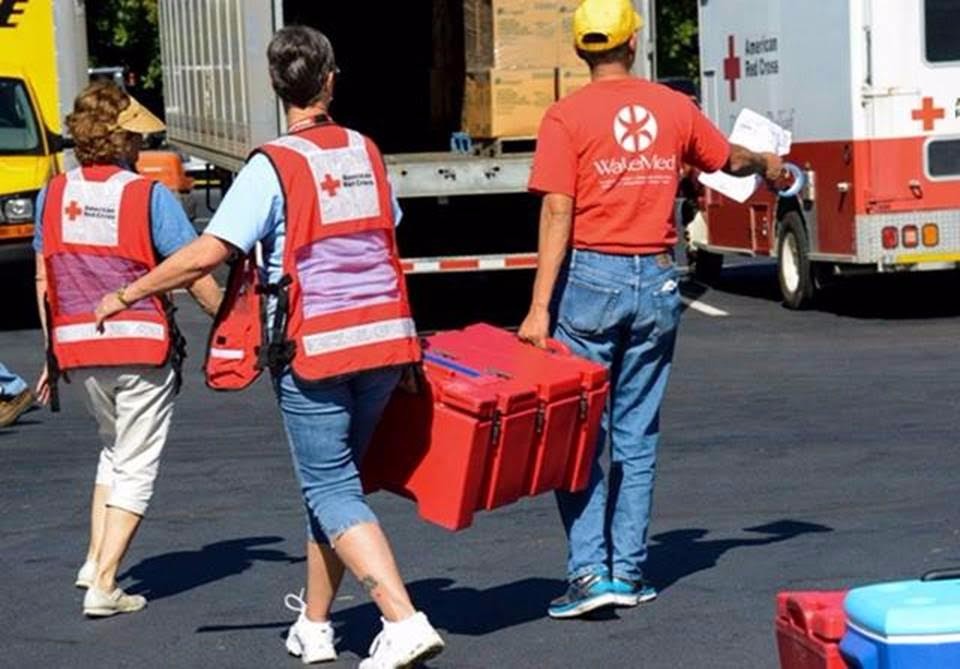 We’re going to be operating in the Carolinas for weeks to come. We’ll keep you posted, but before we leave Matthew, here’s an amazing moment that occurred Saturday on our Georgia operation. Long-time ARC volunteer Dan Chandler (our out-going Assistant Director of Operations Ops) from Alabama and an owner of multiple businesses and non-profits in 5 countries made an incredibly generous donation to his home Region. His stated reason: the superb and effective leadership of NHQ Senior Director for Operations Virginia Mewborn—currently deployed to Georgia as the Deputy Director of Relief Operations. Confirming what you already knew to be true, Virginia and her team are doing amazing work there—as are so many other dedicated leaders across the Matthew theater of operations.

In consideration of updated government orders aimed at stopping the spread of COVID-19, staffing of International District offices is limited at least through Oct. 7 while staff works remotely on a full-time basis. Staff may be contacted as follows: