HD Chambers, Alief ISD Superintendent of Schools, was named the 2013 Ambassador of the Year by the Friends of Texas Public Schools during the annual awards dinner January 17 at the Frontiers of Flight Museum in Dallas.

“I’m honored to have received this award from an organization that does so much to promote public education in our state each and every day. It was my honor to work alongside Representative Jimmie Don Aycock and so many others to make House Bill 5 a reality for students in Texas public schools.”

Jimmie Don Aycock, Chairman of the House Public Education Committee, was named the 2013 Friend of the Year by the Friends of Texas Public Schools.

Chambers was honored for his work during the 83rd Texas Legislative Session on behalf of House Bill 5, for his advocacy of post-secondary readiness and greater flexibility in graduation plans and for endorsement options for students. He spent countless hours working with Aycock as they crafted the plan to turn his vision of graduation plan flexibility into action.

“HD is a humble man. He’d never tell you that he was instrumental in the passage of House Bill 5, quietly leading the leaders of many organizations and interests from behind the scenes,” said Scott Milder, President and CEO of Friends of Texas Public Schools. “He also wouldn’t tell you that he was the educational genius behind the bill, working as the liaison between public school leaders across the state and Chairman Aycock and his staff… to be sure HB 5 had meaningful application in our public schools.”

In order to ensure that the original intent of HB 5 was not altered, Chambers educated

legislators about the concept of endorsements and engaged with both legislators and the representatives of numerous education leadership organizations to develop specific statutory language to accomplish their mutual goals. He also facilitated discussions among superintendents, college and business representatives, and advocates for rigorous course options for all students.

His involvement with HB 5 did not end once the bill was passed; Chambers has devoted countless hours to developing strategies for the successful implementation of this important legislation throughout the state.

“He understands that legislative advocacy is a continuous process, having worked with his colleagues and with business and community leaders well in advance of the legislative session to frame the legislative agenda. And since the passage of HB 5, he has been a stalwart supporter of the flexibility envisioned by the sponsors of HB 5 before the State Board of Education and among his education colleagues,” Milder added. 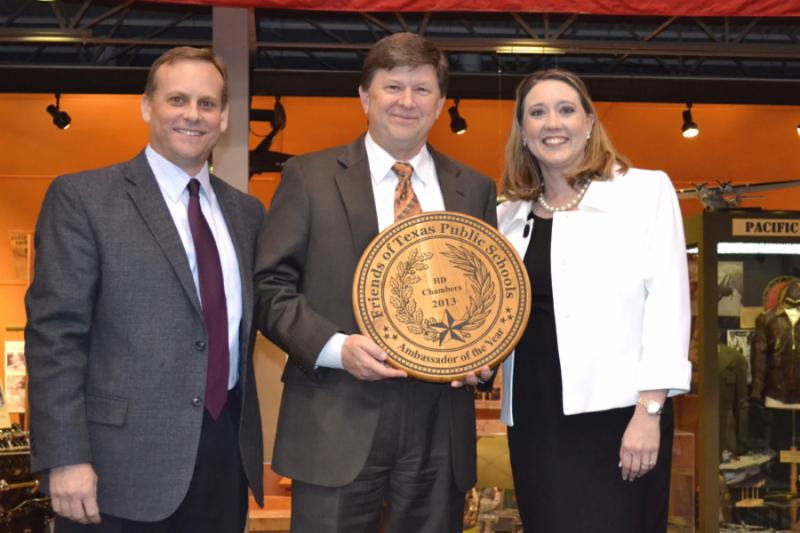 Scott and Leslie Milder, founder of the Friends of Texas Public Schools, present HD Chambers with the Ambassador of the Year award.