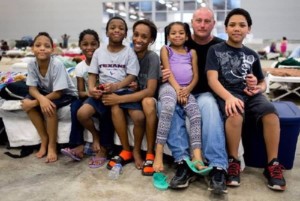 The Red Cross has mobilized the largest sheltering and feeding effort since Superstorm Sandy to help people in Louisiana affected by the floods. We’re seeing the largest volume of people in need of emergency shelter in the last four years. And early planning estimates indicate we may need to serve more than one million meals over the next few weeks. In addition, FEMA has reported high numbers of people registering for emergency assistance from the government, which is another indicator of the tremendous need for help. This response is anticipated to cost at least $30 million – and this number may grow as we learn more about the scope and magnitude of devastation.

This is the second time in five months that Louisiana has seen more than 24 inches of rain during a single storm and the threat of floods isn’t over. More rain is possible and the flood waters continue to move southward. According to meteorologists, more than 6.9 trillion gallons of rain – enough water to fill 10.4 million Olympic pools – deluged Louisiana this week. Major to record flooding is expected along portions of the Amite, Vermilion, Mermentau and Calcasieu Rivers. Twenty parishes across Louisiana are now under a federal disaster declaration. 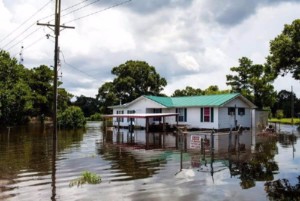 Due to flooded, closed or damaged roads, getting help to some areas has been challenging. Despite these difficulties, the Red Cross is working tirelessly to provide food and shelter to thousands of people forced from their homes. More than 1,000 Red Cross workers from all 50 states will be on the ground helping in Louisiana by Friday. In addition, hundreds of local volunteers are supporting relief efforts.

On Tuesday night, more than 7,000 people were seeking refuge in more than 34 Red Cross and community shelters in Louisiana. At the peak of the floods, more than 10,000 people spent the night in 50 shelters across the state. The Red Cross and partners have served nearly 100,000 meals and snacks since the onset of the flooding. As needs continue, the Red Cross has mobilized more than 60 disaster response vehicles, nearly 40,000 ready-to-eat meals and more than 24 trailer loads of shelter and kitchen supplies to bolster relief efforts. Some of the supplies arriving include water, personal hygiene items, insect repellant, cleaning kits, bleach and other important supplies.

Large disasters like this flooding create more needs than any one organization can meet, and the Red Cross is working closely with the entire response community – federal, state, county and local agencies, other non-profit organizations, churches, area businesses and others – to coordinate relief efforts and deliver help quickly and efficiently, keeping in mind the diverse needs of the community. Some of these partners include Southern Baptist Disaster Relief, the NAACP, Islamic Relief USA, Church of the Brethren Children’s Disaster Services, Save the Children, AmeriCorps National Civilian Community Corps, AFL-CIO, Verizon, Duracell, Institute of Electrical and Electronics Engineers, Baton Route YMCA and Church of Jesus Christ of Latter Day Saints.